From No Man's Sky Wiki
(Redirected from Race)
Jump to: navigation, search 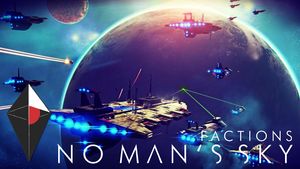 Factions, also known as Races, are the sentient species in No Man's Sky.

There are currently five different factions in No Man's Sky, each with distinct languages, lore, and technology.

While the Sentinels serve as a police force and are of unknown origin or true intentions, the three main factions (Korvax, Gek and Vy'keen) inhabit the star systems.

Reputation can be gained for any faction by performing certain actions: