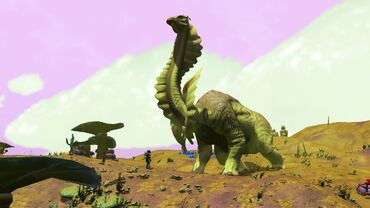 Rangifae is a genus of fauna in No Man's Sky. They are commonly referred to as "diplos" due to their similarity to long-necked sauropod species from Earth biology, including Diplodocus.

Rangifae species can be found on land, excluding caves.

Rangifae are considered one of the rarest land fauna in the game, with only a 0.25% chance to be found on a planet.

Daplokarus appears to be pre-release example of the Rangifae fauna, but any species similar to it is yet to be found, given the updates that have been given to fauna since the release of No Man's Sky, it may be more likely to find similar creatures to Daplokarus in the future of No Man's Sky.

The Rangifae genus has one major variant, which can be divided into two subgroups: arched-back and flat-back. Both variants are fairly similar, with the only difference being, as the name suggests, the arched-back variant has a "humped back," while the flat-back variant has, by comparison, a fairly horizontally level back.