Rekopiapostei-5 is a large, bountiful and highly populated planet in the star system Filmurakh on PC Version No Man's Sky universe. Interestingly, it has low Sentinel activity despite being in Survival Mode.

This is an absolutely beautiful Earth-like lush paradise. If it had more "epic" megafauna, oceans (medium landmasses variant) and rare resources like Vortex Cubes and Albumen Pearls, this Green Heaven would've been so much better. But as is, the planet is already quite the beautiful green gem. 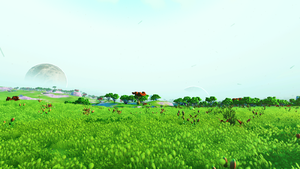 Grass-covered plains. A forest is in the distance.

The planet is dominated by vast rolling plains, wide open plains and expansive prairies. Smooth hills and mountains provide a beautiful view of the plains below, while also looking quite grand when viewed from a distance. Occasionally, some Nickel arches and rock formations will stick out, adding more character to an already magnificent landscape.

Caves are a little on the sparse side, usually found near or on the hills and mountains. There are a few pits here and there, while some rock formations hide them. Aluminium can be found either in pits or caves. 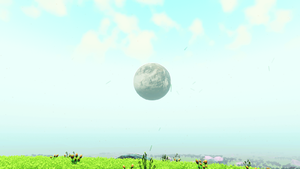 The planet has Earth-like blue skies but is constantly covered by a thin veil of white fog. The star's dark skybox results in beautifully dark night skies where the stars shine clearly.

The weather is quite gentle and mild, as storms never seem to happen. It is quite calm, as there is almost no wind blowing. Occasionally, a light breeze will blow.

Temperatures range from 17.6C during the day, going down to a cool -13.2C at night. Storm temperature is currently unknown as they never seem to happen. 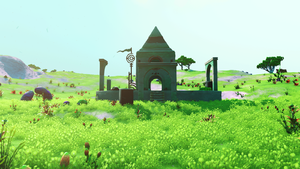 A ruin that resembles a small house or Church.

This planet is best appreciated in person. Screenshots and videos don't do justice to how beautiful this Earth-like paradise is.

Walk around and feel what it's like to be in an Earth-like lush paradise. Experience the feeling and joy of freedom in the planet's vast rolling plains. Forested areas are frequent and it's quite nice to just get lost and wanderlust around. When the trees finally open up to a prairie, there is an urge to just run around.

Find a herd of adorable little diplos and have fun playing with them. They may look a little strange, but they are gentle creatures. Feed them Iron and chances are the whole herd will happily run around you in glee and even a few will follow you home. Aside from diplos, there are also rats and large goats. Don't worry! All of them are just as friendly and docile.

Hop in your Exocraft and take a long and relaxing trip through the open plains. Getting a little bored? Find a crest and get some big air. Look for a rock formation and practice doing epic backflips. You may want to train in doing the "Backflip Bullseye" in preparation for the olympics. Except it's going to be a lot trickier here due to the shape of the large rocks. 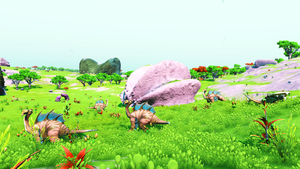 A herd of diplos.

Green clover-shaped grass covers most of the landscape. The rich soil allows the green-leaf willow-like trees to grow in large numbers. Occasionally, one can find orange-leaf willow trees among their more common green counterparts. Together with the grass are varieties of colorful plants and wild flowers.

The dominant animal species here are adorable 1.5m diplos. They are found in small herds of 3-7, usually with at least 1 youth. These diplos tend to either play around or graze in the area they're in. When approached, they'll run away unless fed with Iron.

Other animals include rodents, birds and large goats. There are no predators here. All animals in this planet are friendly and docile.

Rekopiapostei-5 is the true seat of power, economic center and capital of Filmurakh and the whole region of Hurenima. However, Filmurakh's people are really, really good at hiding that fact, making it seem like Eekelsp Rikadele is the main planet. They thought of virtually everything in case of unfavorable situations, ensuring the protection of their beloved Green Heaven.

All matters of trade, negotiations, political meetings, shenanigans and vice versa happen in Eekelsp Rikadele, as everyone wishes to keep this planet as peaceful as possible.

The planet is a VIP zone in a similar nature to Gukarlevskios-Aep, where only the most powerful, wealthy and important reside. Everyone else lives either on the moons or the oceanic lush planet. Extremely strict and tight rules are placed upon everyone here in order to preserve the planet's splendor. Aside from a being VIP zone, it's also the system's tourist area where its people and Hurenima denizens come visit, providing additional income. A LOT of additional income.

This video shows that despite being in Survival Mode, the planet has low sentinel activity.