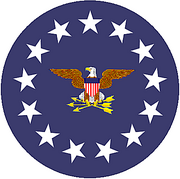 The seal of the Republic Starfleet

The Republic Starfleet, also known as the American Navy is the primary spacefaring branch of armed forces of the United States of New Cascadia and one of the three uniformed services of the United States (The other two being the Army of the Republic and the Office of Internal Security). The Republic Starfleet was founded in 2115 by President Fulcre from the remaining American military units in Euclid after the closing of the wormhole. Although the Starfleet suffered devastating losses during the desperate bid to evacuate New Cascadia mere hours after its founding, the survival of the fleet ensured that the American colonists in Euclid would continue to survive and prosper. The Starfleet has its headquarters on New Eden.

Many things such as traditions, customs, ranks, and uniforms are carried on from the its predecessor in the United States Navy and United States Marine Corps. The commander-in-chief of the Starfleet as well as of the entire Armed Forces is President Halnine, who also holds the official rank of Fleet Admiral in recognition of his prior military service.

The most senior naval officer is the Chief of Naval Operations, a 4-star Admiral. This officer is officially on the same level as the Commandant of the Marine Corps, and both report to the Secretary of the Starfleet. Both the Chief of Naval Operations and the Commandant are on the National Security Advisory Council, which serves to advise the President of issues related to the military and intelligence gathering. They are also members of the Joint Chiefs of Staff (The other members being the Chief of Staff for the Office of Internal Security and the Army of the Republic).

The operating forces of the Starfleet are split into three components; the Home Fleet, the Survey Fleet, and the Marine Corps. The Corps is separate from the traditional Starfleet command structure and is nominally "a branch within a branch".

"The mission of the Republic Starfleet is to "train, equip, and maintain combat-ready spaceborne forces capable of winning wars, deterring aggression, and ensuring the continued survival and prosperity of the American people in Euclid" - Spacefighting Manual DoS.001

The flagship of the Starfleet is the siege dreadnought USS Congress (DRD-4), a Constellation-class ship. Each dreadnought is armed with an array of railguns, plasma cannons, beam weapons, and missiles. Each ship has a complement of 15,000 crew and can carry many more in terms of passengers and Marines. Roughly 4,000 meters long, they are often nicknamed "Super Star Destroyers" in reference to a series of popular American science fiction films. In addition to its airwing of fighters, each dreadnought has one accompanying "companion" corvette stored in its hangar bay: this corvette is responsible for transporting dignitaries, performing escort work, and hunting down blockade runners.

Following American naval doctrine of the 21st century, the dreadnought is typically deployed with a host of smaller vessels such as corvettes and destroyers. These smaller vessels are tasked with protecting the dreadnought and serving as a reconnaissance force. Logistical support for the fleet is usually provided by a nearby freighter or multiple haulers. The Republic Starfleet currently only has one dreadnought, with one more (USS President) being constructed in orbit on the outskirts of Liberty System.

Destroyers are large spacecraft that serve as the primary combat vessels of the Republic Starfleet. Each destroyer is around 300-400 meters long, with a crew of around 1,000 and the ability to garrison several Marine companies. Like dreadnoughts, Destroyers are capable of orbital bombardment and sustained combat, as well as having an air wing of six to nine fighters. However, should mission objectives require more craft, components such as fuel tanks and hydroponic farms can be taken out to accommodate more fighters (This was notably done to the destroyers USS Wyoming and USS South Dakota in Task Force Sigma). A destroyer is comparable in size and appearance to a regular freighter, albeit more heavily armed.

The corvette is smallest spacecraft that can be rated as a "ship". Each corvette is armed with the basic necessities of space combat, and are equipped with the engines needed to achieve long distance space travel. They do not, however, have any orbital bombardment capability, nor can they hold an airwing. Although purpose-built corvettes exist, many corvettes used by the Starfleet today are simply fast haulers that have been refitted for war. A corvette has roughly 6-12 crewmen and is about 60-70 feet long, enabling it to be stored in the hangar of a dreadnought.

The USS Pegasus (CR-142), a Type II Corvette, heads to the planet Trinity on a scientific expedition

Of all the primary ships used by the Starfleet, only corvettes are capable of landing on a planetary surface. Although destroyers and dreadnoughts can and often will park themselves in the upper atmosphere of a planet, they are not equipped for hard landings. This makes them especially useful to the Survey Fleet, which utilizes corvettes as their primary ship of choice. Corvettes are often useful for patrol and blockade missions; small and nimble and size but yet still well-armed, they provide a capability that the larger and more cumbersome dreadnoughts or destroyers cannot. They can also be used for landing troops, cargo missions, and (quite often during the First Contact War) as a commerce raider.

The F-67 'Raven' is the primary starfighter of the Naval Aviation Corps. The fighter was designed by Lockheed Martin for the United States Air Force as a seventh generation fighter to "revolutionize" the face of warfare itself; the result was a hyper-sonic fighter capable of performing orbital maneuvers, the first true "starfighter" ever built. Due to its efficiency, the fighter would soon spread to the United States Navy and Marine Corps as well as seeing export to other spaceflight-capable allies of the United States. Due to the decreased effectiveness of missiles, the fighter was rearmed with plasma cannons

Almost a thousand of these fighters would take part in the First Contact War, fighting the Korvax and the Sentinels. The 'Raven' was superior in most respects to the Korvax, but found a formidable foe in the sentinel interceptors in terms of maneuverability and armament. After the evacuation of New Cascadia, the fighters squadrons were reorganized to account for the massive losses taken.

The 'Raven' has variants of A/B/C, as well as a 'Super Raven' variant; the 'Super Raven' is able to fully match the Sentinels in terms of armament and maneuverability while not making any sacrifices to its impressive speed. However, the number of 'Super Ravens' are low and since it is too valuable to use on most missions, these aircraft only stationed on New Eden.

'Raven' starfighters are not hyperspace capable, and always travel with an accompanying destroyer or dreadnought.

The A-27 is a gunship widely used by all branches of the American military except the Survey Fleet. Although it is rather slow and cumbersome, the ship is extremely well-armed and effective at ground support and bombing missions. Like the attack helicopters of the 21st century, it has vertical take-off and landing capability, as well as the capability to hover indefinitely - these are achieved through the rotating its pulse jet engines on a low setting. While this means that landings and takeoffs can be rather slow, the thick armor of the A-27 prevents it from being damaged too badly.

Each A-27 has a crew of two. The A-27 shares the spaceflight capabilities of the F-67 'Raven', but is capable of short jumps into hyperspace if needed (A capability very rarely used). They can also be modified to carry a dozen passengers, something sued either for moving around personnel or dropping troops into combat zones.

The United States Marine Corps (USMC) is the naval infantry branch of the Republic Starfleet. Marines are in charge of guarding orbital facilities, performing ground reconnaissance, serving as shock troops, and garrisoning Starfleet vessels. The Marines have been a component of the United States Navy since 1834, and have worked closely with warships on both the tactical and strategic level. Large vessels such as Dreadnoughts usually carry entire Marine regiments onboard, but smaller vessels like Corvettes will have few - if any - Marines onboard. They Marines also have numerous planetary installations as well as orbital defense stations. Having established their reputation as warriors in the 20th century, Marines are well known as taking pride in the tradition of being the "first to fight". As of 2118, the Marines have roughly 19,000 personnel in active service, making them the smallest branch to be represented on the Joint Chiefs of Staff.

Like the Army, the Marines make use of M88 tanks and a variety of other armored vehicles. Marines are also equipped very similarily to the Army forces, sharing the same equipment, armor, and gunships - Marines do not, however, have any significant use of robots. While it is uncommon for Army soldiers to be deployed off-world, almost all Marines see some time in space (Most often as security personnel or serving in the Fleet Marine Force).

The flag is flown at all Starfleet installations, and carried upon every Starfleet vessel. It is painted beneath the American flag on the exterior of ships operated by the Republic Starfleet to signify the status of the ship as a command vessel.

The current naval jack of the Republic Starfleet
Retrieved from "https://nomanssky.gamepedia.com/Republic_Starfleet?oldid=237811"
Category: