Residual Goop is a resource.

Residual Goop (Jn) is a resource and one of the junk special elements.

A pulsating, foul smelling goop that builds up in poorly-maintained machinery. 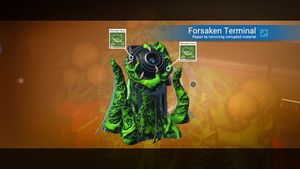 Every Abandoned Building has a termnial and interacting with it allows the player to either discard the Residual Goop or move it to the exosuit inventory. After that the terminal can be used. Each terminal can contain up to 200 Residual Goop.

Residual Goop can be purchased from some Galactic Trade Terminals and pilot NPCs.

Residual Goop is used as an ingredient for refining the following products using a Refiner:

Through multiple steps of refining, Residual Goop can be converted to Viscous Fluids, to Living Slime, to Runaway Mould and then to Nanite Cluster.