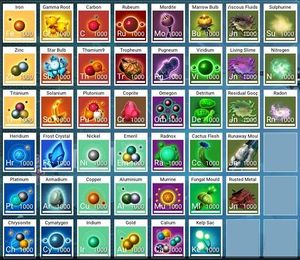 Resources are the primary materials for multi-tool, starship, exosuit and exocraft upgrades, as well as base building.

Resources in No Man's Sky are organized in a periodic table custom made for the game. When resources are mined, they are broken down into their chemical elements, and these can be combined into new products, resources, etc. and sold on the open market.

Resources can be obtained in a wide variety of ways. They can be purchased, mined from raw elements on the ground of planets (either by hand or with an AMU), mined from asteroids in space, harvested from plants, given to you as gifts from animals you befriend, found in crates and containers on planet surfaces, and harvested by killing plants or animals or mining mineral formations. The abundance of elements varies significantly from one planet to another, and some resources are easiest to obtain in specific ways. 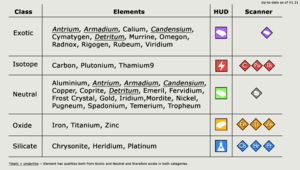 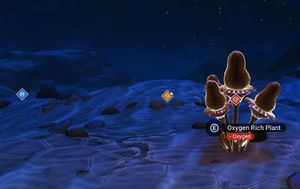 When the scanner is used on a planet, diamonds of red, yellow, blue, green, and purple are displayed after the scan. These colors represent the location of elements belonging to the element groups indicated below. Resources of common rarity will not have the diamond markers. All mineable nodes (chunks of minerals in rock form) will have grids outlining the parts that will give resources when mined. Nodes that do not have grids DO NOT give resources when mined.

Scanning rock formations, crystals and flora with the Analysis Visor can reveal secondary resources, which can then be mined on all other instances of that scanned object.

Following the Atlas Rises update, harvesting elements from the terrain, plants, and animals can also supply a small chance to receive any of the elements below as a secondary resource (excluding items under the "Other Resources" lists below). The secondary elements are listed when scanning elements.

It does not contain alloys or other crafted products. (A list of alloys follows this table.)

Note that each individual resource page contains a list of items where the resource is an ingredient. As of the Atlas Rises update, the only resources that are NOT used in crafting are Pugneum, Tropheum, and Murrine.

These can be collected with an Atmosphere Harvester or as a secondary element on certain plants after being scanned.

Resource Deposits are concentrated nodes of a certain element. There are always two resource deposit types of any kind plus Heridium on every planet (e.g. Copper and Aluminium).

It is possible to find bigger nodes which contain more elements than usual. There's a chance that those nodes can be marked by scanning in space with a spaceship.

Some elements can also be found in crystalline form. The color of the crystal indicates which element family is present.

Some elements can be found as compounds in certain plants on planet surfaces:

Additionally, these elements can be collected from fauna interactions, but can also be farmed:

The following elements and element abbreviations were used in the pre-release version of the game.

Sean Murray commented during a gameinformer interview, "We just wanted to be a bit freer. There's only something like seven different compounds or something like that that we create really good types of liquids that you could have creatures survive in. And we might want more than that for the game. We might want to decide our own rules and you just get tied up into too many conversations about it and things like that. Sometimes gameplay and science don't sync together. That's sort of a shame but I think for the best."[2]