The irradiated weather of this Radioactive moon causes constant drain to the life support systems, so protection against radiation is recommended. Despite its dangerous environment, this moon presents several life forms of flora and fauna . It also have planetary bases, for the brave that wants to make it its home.

In this moon can be found a (still) nonfunctional Portal.

As a Irradiated planet, it's RAD levels are very high.

The atmosphere is somewhat hazy, and the skies have a very light turquoise hue during the day and dark red during the night. This moon has frequent radioactive storms. Its underground waters are extremelly radioactive.

In addition to the normal Waypoints, this planet has Planetary Bases.

In this moon can be found a nonfunctional Portal. The purpose of these structures is still a mystery. The location is marked with a Comm Station. 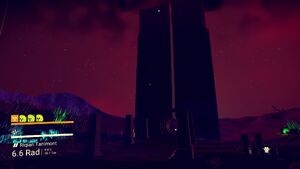 The fauna on Riqian Tanimont is full, composed of mostly docile animals divided into 3 species: Asiaiat, Locombuc and the gigantic Emlingul. The only aggressive specie is the beautiful but deadly Lokosian, which are biped deer-like animals. The sky is dominated by the Curutec species of bats. 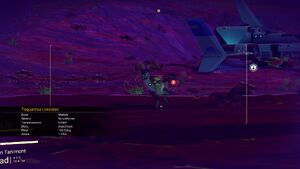 The beautiful but deadly Locosian species

The aquatic fauna of this moon could not be found, as there is not visible water on it's surface and the rest is buried deep in the last layer of the ground. Underground flooded caves could not be found either.

The flora of Riqian Tanimont is frequent and formed by several plants with appearance of sponges, corals and tentacled blobs. There also can be found some tall trees without leaves. Plants yielding Thamium9, Zinc, Platinum and Antrium are common. Because of its irradiated atmosphere, there is an abundance of Candensium's plants also.

The featured minerals of this planet are Candensium, Gold, Copper and Heridium, which can be found as large mounds or underground patches.