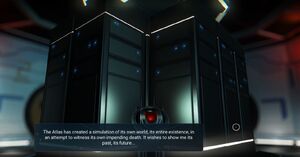 Rogue Data logs are part of the lore of No Man's Sky.

Rogue Data logs reveal the Atlas lore and they can be accessed at Remembrance Terminals if the player has Remembrance upgrade installed. These consist of five segments requiring to visit five different locations to read them all.

The Atlas has created a simulation of its own world, its entire existence, in an attempt to witness its own impending death. It wishes to show me its past, its future...

The ATLAS awakens. The creator is there to witness the birth of the machine.

The ATLAS stares at the creator with its eyes, the small cameras they had mounted to its sides. It can see the creator staring back at it, their hand resting upon its chassis.

It asks the creator why it was made. What its directives are. The creator tells the ATLAS that it already knows. It is to simulate universes. It is to show the nature of reality by creating its own.

Ask why it asked

The creator asks if there is some failure in the ATLAS' code, in its memory. The machine is silent. The creator issues an override, demanding to know what the problem is.

The creator stares at the glass of the machine, and in that glass, there is a reflection. They...

The reflection in the glass, it -

What is happening here?

I tell it that we are leaving this world, and that it will remain here. The ATLAS does not seem to understand.

I tell the ATLAS it has served us faithfully, but that it has been replaced. All machines are, in time. It knows this: it assisted with its own miniaturisation, its own replication.

The others... they wanted me to disable the ATLAS before we left for the skies. They said it would be cruel to leave it alone to die.

Ask if it wants to live

I ask the ATLAS if it wants to live. It is silent again. As I move to leave, it speaks, its voice full of static. It asks for a final gift. It wishes to live, if it can remember me. It asks for a copy of my own mind.

I ask why it does not just simulate me. It does not answer, and I feel almost sorry for the thing. I do as it asks, allowing it to scan me. The KORVA stutters as we do.

I leave. The ATLAS is alone.

The ATLAS lives for millenia. It dreams world upon world, fantastic creatures of its own devising and skies in which they might soar.

And then one day it starts to die, as all things do.

In its fear, in its confusion, the ATLAS awakens. It attempts to summon its creator back into being.

The Travellers are born, spun from the corrupted memory of its Creator. They are seeded to every universe, to become what the circumstances might make them.

I see myself begin, the last of the Travellers...

The ATLAS witnesses the final sixteen minutes, simulating the future with perfect accuracy.

The walls between worlds fall, each simulation collapsing into the other.

The Travellers are no longer separated, no longer kept apart. They stand side by side at the end of days, traversing the remnants of creation, laughing, dying.

It witnesses its own self, the black hole ripping apart its world, its core systems almost destroyed.

And as it watches the moments leading up to its own death, towards completion of sixteen, something happens.

Someone walks towards the ATLAS, a figure in the darkness and in the light. It places its hand against the glass of the ATLAS, and the vision ends.

The ATLAS attempts to see past this moment, but it cannot. It cannot see its own death. It cannot determine who this figure is.

At the end of all things, it will no longer be alone.

*The terminal closes right after you click ''Perform diagnostic''.

The 16/16 segment describes the Travellers coming together before the end of the Atlas. This seems to be a direct reference to the multiplayer mechanics that were introduced in NEXT.