Runaway Mould is a resource.

Runaway Mould (Jn) is a resource and one of the junk special elements.

The British spelling of this word is used in the wiki.

An out of control mould growth that builds up in poorly-maintained machinery.

Likely to be several different species of mould, merged together into one super-colony. 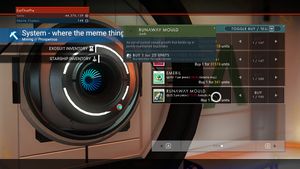 Runaway Mould can be refined using a Refiner with the following ingredients:

Runaway Mould is used as an ingredient for refining the following products using a Refiner:

Through multiple steps of refining, Residual Goop can be converted to Viscous Fluids, to Living Slime, to Runaway Mould and then to Nanite Cluster.