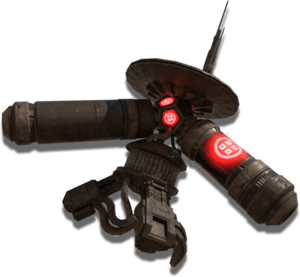 Salvageable Scrap is an artificial resource.

Salvageable Scrap is the long-forgotten remains of a fallen satellite.

icon after performing a scan in space, if present.

On the planet it can be located with the Analysis Visor by looking for the same icon, but this time Salvage Container will be indicated.

It can be found partially above ground on the planet surface and the Terrain Manipulator is needed to dig it out.

All of the Protective Casings must be destroyed before the Salvage Container, which will reward the player with a random Salvaged Scrap.