Sebaddo Utsus is a large ringed lush planet in the star system Olmasa-Naz on PC Version No Man's Sky universe. It has red grass, zesty yellow-orange oceans and trees having orange and blue colors. Its terrain archetype is craters.

It is an absolutely beautiful hidden paradise tucked away in an uncharted system. Life here is so relaxed and idyllic, even the Sentinels are chilling in Survival and Permadeath Modes. Its location, spectacular rings, geological features, relaxed nature and varied climate all contribute to a planet brimming with character most other lush planets can't emulate.

In the Visions update, the color palette has changed into something that is more befitting of a lush planet in a red star system. 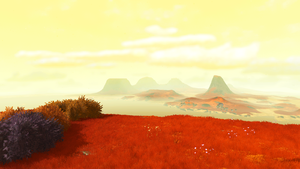 Towering and lofty peaks adorn the land. Some of them resemble buttes. They create quite a majestic view whether viewed from below or above.

Sebaddo Utsus is a continental lush planet, having sizeable landmasses separated by vast oceans. The continents are water-logged, having many lakes and winding rivers. Some lakes can be deep enough for Kelp Sac to grow.

Lofty peaks tower over the rolling plains, occasionally forming mountain ranges and valleys. Some of the mountains resemble volcanoes. Some are buttes, having a relatively flat area of land on the top. They're excellent spots for building homes with epic views. Below the mountains are rolling plains and small hills covered in red grass and sprawling forests. When land meets sea, there are pristine beaches that are just perfect for relaxing, sunbathing and swimming.

Caves, usually a primary source of Cobalt, seem to be somewhat of a rarity here. Fortunately, the many Cobalt deposits make up for that. Unfortunately, resource exploitation and terrain manipulation are strictly forbidden here, as preservation of its beauty and impeccable character is of the highest order.

The large amount of craters scattered throughout the land implies that in the past, the planet was either bombarded by space objects or has hyperactive volcanic activity. Some of the mountain ranges even resemble massive craters, as if a huge asteroid struck. It could also be a massive caldera. The constant bombardment may have formed the planet's rings. 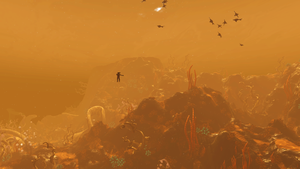 Away from the coasts and beneath the waves are depths full of life. The bioluminscent corals and large, seemingly artificial plants add a feeling of mystery to what lies within.

The underwater views of the planet are rather unremarkable near the coast. There is barely anything to be found. However, the farther away from land, the better and more lively things get. At the ocean depths is a place full of life. Aquatic creatures thrive in high numbers. Beautiful twisty bioluminescent coral-like formations sprawl across the ocean floor, providing homes for many species of aquatic life. There are Abyssal Horrors too but they are far and few in-between. The overall amount of Cyto-Phosphate is on the low side, but there are decent amounts of Living Pearls and Crystal Sulphide. But the most notable thing about the depths is the presence of large Cable Pods. While rare, one wonders how seemingly artificial objects ended up in a place that is virtually unknown to all until the system and planet's recent discovery. 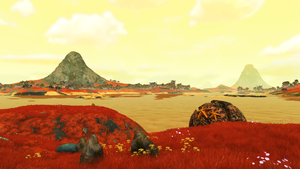 The weather here is mostly calm and idyllic. Storms occasionally occur to keep the air clean and the climate in-check.

Sebaddo Utsus is located just outside the star's habitable zone. This is supposed to be a frozen, lifeless ice world, but a number of factors have turned it into the beautiful lush paradise that it is. Eyfert Khannate scientists are still studying and debating how it came to be, but the most widely accepted theory is that a combination of powerful solar flares that occasionally pierce through, past planetary bombardment and frequent volcanic eruptions somehow managed to create the ideal conditions for life to thrive in a place where life shouldn't even exist in the first place.

The planet has an atmosphere with a somewhat zesty yellow color. This is likely due to refracting the light from a red star, the high amount of particles in the air and radiation from solar flares being deflected. The particles also reflect the heat and the frequent and powerful solar flares caused by its parent star. This protection is aided by a powerful magnetic field that shields the planet from deadly radiation. While some of the solar flares go through, most of the radiation is deflected by the field, resulting in just a really, really hot fireball. The planet's life has adapted to such drastic temperature changes - forest fires are nonexistent.

The climate seems to be Temperate Oceanic, having temperatures of 16.1C during the day and 11.1C at night. The cool temperatures enable life to thrive in great numbers, resulting in sprawling forests and grass-covered prairies. As mentioned, some of the powerful flares from Olmasa-Naz penetrate through the planet's magnetic field and protective atmosphere. On impact, it causes liquid to evaporate at a rapid rate, forming heat storms and causing temperatures to rise to 96.1C. While being constantly bombarded by flares is bad for most worlds, it is absolutely necessary in this planet as it cleans the air and regulates the climate, preventing it from becoming too cold. The results of all of this: having just one planet-wide climate, whether at the equator or at the poles. And Auroras. Beautiful, beautiful Auroras. Which are not in the game yet. 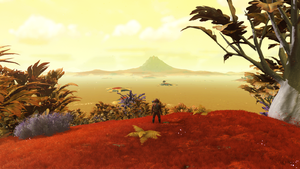 The planet has many beautiful sights, like this volcano in the background. 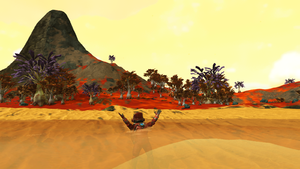 One of the things to do here is swim in the planet's pristine and juicy beaches. 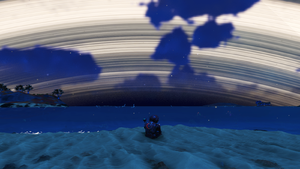 At certain parts of the planet, the rings are clearly visible in the sky.

There are so many things to do in this beautiful, idyllic paradise. BUT FIRST, here is a list of DON'TS.

Now with those don'ts out of the way, here are the things that one can do here.

This section is under construction.

Despite past bombardment, life has flourished. Beautiful red grass cover most of the land. Stubby but towering trees can be found, occasionally sprawling into forests. Fauna such as relatively large Ungulatis and bipedal Felidae can be found grazing the open fields.

There are many bases built here. However, the most prominent is The Red House. It is the home of the Khann, the leader of the Eyfert Khannate. Located on top of a butte, The Red House has spectacular views of the ocean and land around it. A fresh breeze blows almost throughout the day, providing a cool and relaxing atmosphere. A tiny little forest provides an added respite from the responsibilities of being a leader.

The Federation and the Eyfert Khannate's government recognizes Eafort XVIII and Gloss X as the capital system and planet of the civilization. However, the de facto seat of power is this paradise planet hidden in an uncharted system. The citizens of the Eyfert Khannate (also including the government) recognize this planet and its system as the true capital, while Eafort XVIII is a governmental system. Still, majority of the population resides in the Sasageid Band, as the Ilbingew Band is a highly restrictive area where only a chosen few can enter, regardless of fame, status, wealth or power.

When Sebaddo Utsus was first discovered, explorers thought there are no signs of sentient life here or any planet in the Olmasa-Naz system. They were wrong. A shelter was located. The furniture and amenities inside are in good condition, as if someone used to live here until their final days. Traces of a crashed ship are located nearby, seemingly implying a crash landing. However, further analysis reveals that the inhabitant lived his/her entire life here. An electrical storm (cause unknown) and fear of going into the great unknowns of space prevented take-off. Still, this planet is a nice place to live, so it ain't too bad for the inhabitant to not take-off.

Under construction. Based on the notes of one of the planet's zombie-looking bipedal dog species tending plants, which is a sign of intelligence.

This collection of screenshots shows the entire planet and almost all its continents and oceans. Shots are taken at appx. 160,000 - 180,000u away.