Sentinel Quads, also called Quadrupedal Sentinels or Quadrupeds, are a type of Sentinel. 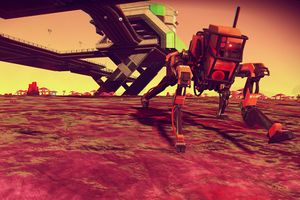 Sentinel Quads are one of the more advanced Sentinels in the universe of No Man's Sky. As indicated by their name, they walk on four legs and are most often seen when a player's wanted level has increased past the two-star level.

On the various planets where they have been seen, their appearance is fairly similar, although their trim colors may differ. They are armed with what appear to be laser weapons.

Sentinel Quads have two attacks they can perform, a charged laser attack and a lunge attack. Both attacks are aimed directly in front of the Sentinel and can be defeated using strafe tactics. However, Sentinel Quads can pass through the walls of player-made tunnels during their lunge attacks, so these units should be fought in open areas. Quads can be healed by Sentinel drones when their health drops low. This can be annoying if the drone ends up stuck under the ground. (Those drones can be killed with melee attacks, and the quad dealt with as normal.)

The quad's weak point is located on its rear, which is most easily exploited by attacking from an elevated position rather than by attempting to stay behind it as it jumps around. Another method is to get them to target your parked ship, allowing you to safely kill them while they harmlessly leap at the ship over and over.

Sentinel Quads are more aggressive than Drones, but may be easier to deal with than the smaller target Drones. At medium range, they will edge around the player, then pause and charge up their weapon and fire a sustained beam, telegraphed by a bright orange-red glow around its "eye" before firing. This attack is fairly easy to avoid, and the Quad is rooted in place while firing, making strafing an effective tactic as they will keep firing until the player moves outside their laser targeting radius or the weapon loses its charge. The beam does track the player, but the player can move faster than it can turn.

In close combat, they will charge at the player, dealing heavy damage and some knockback, and will continue to rush the player in such manner until distance is gained. This makes them tougher in confined spaces, especially in the tight quarters of caves or between large resources nearby.

Quads have been observed to remain in place while engaged, if the player is outside their beam range. This seems to occur if the Drones scan the player while the player is backpedaling from them with the Personal Shield up, causing the Quad to spawn in but be unable to attack due to the shield's barrier blocking line of attack. Even if the player engages the Quadruped while outside the beam's range, the Sentinel will only side-dodge at best, but otherwise remains in place.

Note: The table may not have the min/max values, please help expanding it by further research.

1 This container is shorter compared to the one dropped by Sentinel Quad.

2 This container is longer compared to the one dropped by Sentinel Drone.

They will spawn together with 2-3 drones at a three-star wanted level and again alongside Sentinel Walkers at a five-star wanted level. At the same time, they are capable of alerting additional Sentinels after 60 seconds, causing the wanted level to increase past the three-star level. They can also be seen roaming around alone on hostile planets, especially around secured facilities such as Manufacturing Facilities and Operations Centres. Once engaged, the wanted level immediately starts at three stars.