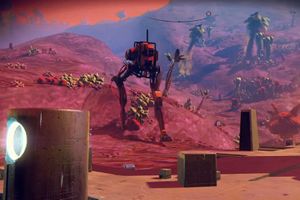 Sentinel Walkers are one of the more advanced Sentinels in the universe of No Man's Sky. As indicated by their name, they walk on two legs and are most often seen when a player's wanted level has increased past the three-star level.

On the various planets where they have been seen, their appearance is fairly similar. The two legs are double-jointed, with the top joint bending backwards like an ostrich and the lower joint bending in the same direction as a human knee (exactly opposite to the large sauropods on pre-release planet Vesta Prime). The main body/head is observably oversized, likely making them top-heavy.

Unlike Sentinel Quads, Sentinel Walkers attack exclusively using ranged weaponry. While their leg and upper torso armour is intact, they will regularly charge and sweep a laser across players, though this laser can be blocked with well-timed use of a Personal Forcefield. The lower torso takes no damage from small arms until the player destroys all four pieces of leg armour and the upper torso armour, at which point the Walker releases a barrage of blue explosives around itself and switches to a rapid-fire plasma attack which can be dodged much more easily than its original attack. Once it has switched attacks, players should target the lower torso with non-ricocheting weaponry in order to destroy the Walker. The weak point is a small grey plate near the top of the lower torso. Once it is dead, its unique part must be retrieved from the Combat Supplies container it drops. 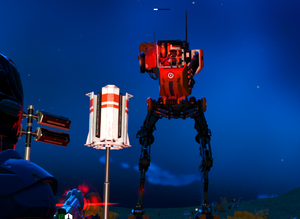 The weak point of a Sentinel Walker being aimed at directly, underneath the cross hair.

Also known as Bipeds, they are covered in armour plates in multiple locations along their legs and on their head unit. With their much larger stature and longer legs, they can keep pace with a Roamer or Nomad exocraft; however, they do have some trouble navigating hilly or rocky terrain, attempting to go around obstacles. Their primary means of attack is a powerful sustained laser beam similar to the Quad's, and they will continuously move to keep the player within sight and range of this beam. The beam range is significantly further than that of the Quad, and deals much more damage and tracks almost perfectly to maintain the damage output. When charging up the beam, the weapon causes a bright red-orange glow on the forward plates, and like the Quad, the Walker will remain still while targeting.

The armour plates on their bodies have much higher defense, however destroying them appears to weaken the Walker. Removing the plates from their legs will weaken them, but their main head must be destroyed to kill them. The armour on their head is much more resilient. Once the forehead plate has been destroyed, the Walker will stumble and release a vertical volley of falling energy projectiles. At this point, they abandon the sustained laser beam and attack with the same blasters as the Drones, with a greater number of projectiles before recharging. Arguably, this stage of combat is much easier to deal with, as the blaster bolts have a lower flight speed than the sustained laser, so strafing at a distance can prevent any bolts from hitting while the player attacks with their own projectiles. Circling the Walker, or changing strafe direction once the Walker's magazine is empty, can lock it into a cycle of turning and then opening fire, effectively leaving it completely open. Their recharge time on the blaster bolts is fairly long as well, further leaving them open to attack.

Walkers are also much more cognizant of the player's presence, and appear to have a broader range of view. Hiding inside a building does not always avoid detection from Walkers; if they are close enough, they can still detect the player.

Note: The table may not have the min/max values, please help expanding it by further research.

1 This container is shorter compared to the one dropped by Sentinel Quad.

2 This container is longer compared to the one dropped by Sentinel Drone.

Their attack consists of a four-hit laser that momentarily disorientates the player's screen when hit by it. Players who are not under good cover (or not good in dodging) will have difficulty defeating the walkers. The laser can be avoided by staying under or behind the walker. One can still jump into their ship and fight it with no threat of injury.