The Seraph Butterfly is a category of fauna. 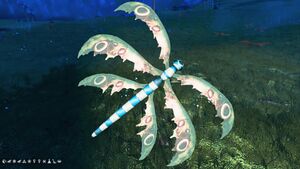 The unique 6 wing pattern & color pattern which defines the Seraph Butterfly, as seen on the C. Potasuippeus species. Head, body, and coloration may vary.

The Seraph Butterfly is a subset of the Rhopalocera fauna genus. This subset is highly sought after by explorers due to its relative rarity and beauty. After requests for examples of this species by the Galactic Hub Exobiology Corps (GHEC) and response by the greater player community, the Seraph is estimated to be approximately as rare as the megafauna diplo but not as hard to find as the Greater Mushroom Beetle or Stained Glass Butterfly.

The Seraph (unlike the various Genera) is a player-created category, not an actual part of the game code. The first documented example of a Seraph Butterfly in the Euclid galaxy was shared on January 28, 2020 by GHEC researcher Phaedrus29. Two further examples from Eissentam have been shared by Reddit users EdVintage (the first known documentation, Universe - wide) and DodgeGreythorne.

A Seraph Butterfly is defined by its unique sextupal wing configuration as well as the presence of the colloquially named "eyespots" on each wing. The wings themselves are scimitar shaped with the trailing edge exhibiting a ragged shape.