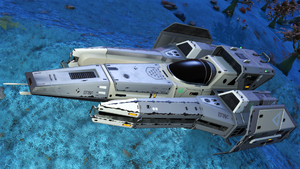 Seshika OH1 is a starship in No Man's Sky.

The Seshika OH1 is a Fighter-type starship in the universe of No Man's Sky.

This ship is popular for both its design, which resembles famous ships like the Riokazat S45 (Galactic Hub Defense Force patrol ship, pre-NEXT version); and its grey scale coloration, which has been remarked as giving the ship a "realistic" and "clean" appearance.

This starship was discovered in the SEFS Arcadia Theta system, located in the Notwertja, a New Aquarius region.