From No Man's Sky Wiki
Jump to: navigation, search
The subject of this article is from the NEXT update.
The information from this article is up-to-date as of 28 October, 2018.
This page fills the role of Embassy for a Civilized space community. The information found here represents a user-created civilization that is a creative addition to the game.

The Solarion Imperium is a civilized space community.

The Imperium is one of the founding members of the Intergalactic Coalition of Civilizations, founder of the Galactic Consortium and a former member of the United Federation of Travelers. Ruled by the mysterious God-like Eternal Emperor, The Imperium holds dominion over the Sea of Kepatoras region. The Solarion Imperium is located 636,138 Light Years from the galactic center. *See the Sea of Kepatoras Region for full list of star systems*

See Census-Solarion Imperium to register in the Imperium.

How to Join[edit | edit source]

The Imperium has several forums;

The Solarion Imperium controls 9 nearby regions that make up the Nine Realms of the Imperium.

Any region outside of the Nine Realms of the Imperium within 2,000 light years is under the jurisdiction of the Solarion Imperium.

Extent of The Imperium[edit | edit source]

See the History of The Solarion Imperium.

The Anunaki meaning Chosen of The Atlas are the denizens of the Solarion Imperium. An average male Anunnaki stands 6' 2" ft, weigh 190 lbs and have a muscular frame to them. Females are 5' 7" ft on average, weigh 110 lbs and have a slim frame to them. Anunaki have golden eyes that shine like 10 suns and red glowing tribal like runes that cover their bodies. They are born with no hair. As part of there culture, The Anunaki wear exotic outfits. Males usually wear breastplates, arm/leg guards(with rare jewels embedded) and capes with a war-like helmet of various design. Females wear long gowns, jewelry, makeup and extravagant head pieces.

The Solarion Imperium has an immense bureaucracy, one of the largest in the galaxy with tens of thousands of officials. The day to day business within The Imperium is run by The Elder Gods of the Anunaki as the Eternal Emperor only makes three known public appearances in any given century.

The government itself is broken up into The Nine Pillars, the core governing bodies of The Imperium. Each is run by an Elder God who oversees one of the pillars. However all Nine must directly answer to The Eternal Emperor.

The Chantry of The Atlas is the spine of The Imperium with a faithful that reaches the four corners of The Galaxy. The Chantry is a fundamental part of Imperium life like breathing to stay alive. Every star system in The Imperium has temples built to worship the Atlas and the Eternal Emperor. The Chantry is the largest cult following of the Atlas.

The Atlas Chantry is one of the largest Cults of Atlas in the Euclid galaxy, and is located in the Eye of Eternity system. The citizens of the Imperium worship the Atlas as a God and see the Eternal Emperor as its conduit. Followers of the Chantry adhere to a series of chants, ballads and verses.

The Chantry of The Atlas is divided into Four Churches of The Faithful.

Across The Imperium, the Eternal Emperor is seen as the avatar of The Sol Invictus(The Unconquered Sun). He alone is the direct manifestion of the Atlas Interface, given a bodily form to walk the stars and impose Order across a chaotic galaxy. Only thru Him, can the Galaxy achieve ever-lasting peace.

Amular Zel Izar is the wife of the Eternal Emperor. In The Chantry, she is worshipped as a Goddess who brings love and protection to her people. The Anunaki call her the Mother Empress and deeply love her and worship her with Zeal.

The Solarion Imperium has one of the largest military in The Galaxy, numbering an armada of star ships 100,000 and a military force of 100 million soldiers. 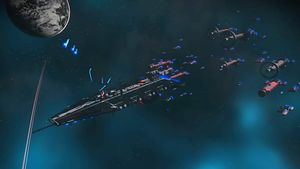 The Armada expanding the Imperium's frontier.

The Solarion Imperium is one of Euclid's most multi ethical civilizations with thousands of alien races calling it home. The Anunaki have uplifted over a thousand races from their own inevitable doom and given them a purpose in The Imperium.

The Solarion Imperium boasts one of the largest economies in The Galaxy. The Imperium is a galactic trading giant with numerous trading partners and trade routes that reach across The Galaxy.

The Solarion Imperium has significant influence across the Euclid Galaxy. Its major partners are the Alliance of Galactic Travellers and formerly the United Federation of Travelers.

Enemies of The State[edit | edit source]

Any images which don't require their own article (ie, fauna) and are not maps or navigational aids may be posted here.