Soleth Prime is a planet.

Soleth Prime is one of the many procedurally-generated planets in the No Man's Sky universe. It is located in the Paroi Major star system before the change of the generation seed.

The surface is marked with sharp jutting blackstone and floating islands of red rock, possibly indicating low gravity on Soleth Prime. The planet seems to be devoid of animal life on the surface, judging from the short view given during its reveal in the No Man's Sky E3 Gameplay Trailer, although a thorny bush can be seen growing amidst the rock and sand.

A planet that resembles Soleth Prime was shown again in the Creating No Man's Sky's Infinite Soundtrack video. It is in range of two other planets: a clouded blue planet, and a yellowish-lime planet. Several red-leaf trees are visible, meaning there is plant life on the surface. 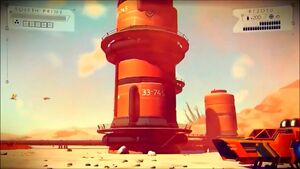 Soleth Prime is a desert planet, though it can also be seen as an arctic planet in different gameplay videos of the game (suggesting that it is the same planet, but using a different seed).

Soleth Prime seems to contain a large number of storage tanks linked with pipes. It is unclear what purpose they serve.(for storage, settlements or research stations, etc.)