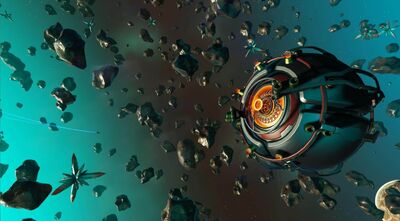 Space Encounters are a type of game event.

Space encounters are just that - unusual encounters that occur while pulsing in space.

The objective of this page is to define a space encounter and list each encounter in a categorized table. Links will be provided leading to the individual pages for each encounter as more information is made available.

The following quotes are extracted from the Official Living Ship Update:

How To Find Them[edit | edit source]

Space encounters occur randomly when travelling between planets while using your Pulse Engine.

The Hyperspace Navigation Station stated a communication as I was using my engine to get to a planet. It said something along the lines of:

A rare object has entered your system. Disengage your Pulse Engine to view it.

After halting my engine, the station warped in front of me.

You can also force the appearance of a random Space Encounter with an Anomaly Detector, which you will very rarely find while mining asteroids.

The following information must still be assessed:

All 6 living ship upgrades can be farmed from any system using the space void eggs, but the class at which each of the 6 appears will be the same in that system. e.g. If you find a Grafted Eye Upgrade Module at B-Class, all Grafted Eye Modules in this system will also be B-Class.