From No Man's Sky Wiki
Jump to: navigation, search
The subject of this article is from the Beyond update.
The information from this article is up-to-date as of 27 November, 2019.
This article was catalogued by the Galactic Hub.

The Stained Glass Butterfly (SGB) is a category of fauna. 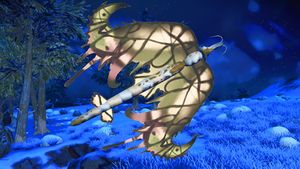 The unique wing pattern & coloration which defines the SGB, as seen on the A. Redrohoe species. Appearance may vary slightly.

The Stained Glass Butterfly (SGB) is a is a subset of the Rhopalocera fauna genus. This subset is highly sought after by explorers due to its rarity: SGBs are considered to be one of the most rare fauna, along with diplos and Greater Mushroom Beetles.

The SGB subset was first defined by 7101334, swampcastlenms, and Old_school_rpg and (unlike the various Genera) is a player-created category, not an actual part of the game code. The first known discovery of a SGB was on July 14, 2017 by Armondo Vin Davood on the NMS Facebook Group.

Beyond, NEXT, Visions, Abyss[edit | edit source]