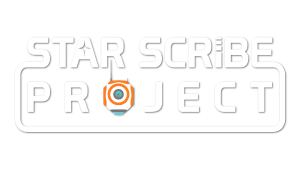 The Star Scribe Project is a fan-based initiative.

The Star Scribe Project is a lore-building initiative based in the Galactic Hub. The focus of the lore is on the stories of The Travelers because the in-game lore alludes that the player (aka Traveler) has forgotten about their own history. Think of this as a cultural revitalization movement for The Travelers.

Interlopers can write longer messages by connecting multiple communication stations across star systems that include clues as to which planet or solar system to visit next for the next parts of the story. Interlopers can enjoy writing their own stories, or just follow in the footsteps of another Traveler by reading the texts of another in order to uncover their journey for enlightenment (ok, it's maybe not THAT big of a deal).

For ease of sustainability and finding new stories, each story's first communication station should be placed on the "sacred planet", Lofamy Rebleth, in the [Hub-G-A5] Mygejo (Traveler Lore Origin) star system.

The first example entry reads "No spoiler talk," and is the first communication station (meaning it is on Lofamy Rebleth) of the first story and wants you to go to the Lennon Star System for the next entry.

The second example would be a continuation of the first and be located on Drogradur NO425. It is the second communication station from the first story and would read "please participate!" and instructs the reader to go to planet Neptune II for the next entry.

*Please note: only sign-up once you have officially placed the introductory communication station on Lofamy Rebleth and can confirm your story number (that way you won't steal someone else's spot)*