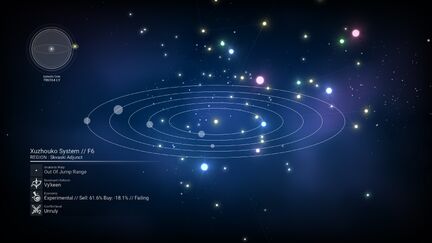 A star system is a system of planets and other objects that orbit a star.

These procedurally generated systems are the seat of all planets and worlds in the game. Most of the planetary systems in No Man's Sky will never be visited.

They are also known as solar systems or planetary systems. 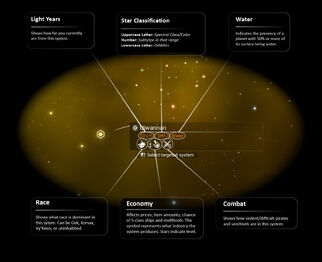 The UI for the Galactic Map shows key information regarding the system selected. The Information that is displayed is:

There are four colours of star systems.

There are three possibilities for the number of stars in a system:

There are and were systems prior to Origins so close to each other (<= 2ly) that they would classify as a binary or at least double star system. Even though their proximity should make them visible, they were not reflected in the skyboxes ingame. Examples of this phenomenon are Olenwag and Houdat. Two lightyears hereby refers to the realistic distance the gravitational pull of a small sun can reach based on its Hill sphere.

Any non-yellow star system can be uncharted or abandoned.

Not all types of star systems are distinguishable based solely on their color or spectral class. This includes star systems containing:

Without a quest or ability to guide the player, both the Atlas Station and the Black Hole can be found by help of a portal. Once visited it can be tracked down by selecting the system from the discovery menu as waypoint after returning home.

Gateway systems are special systems that can be found near the Galaxy Centre. The player can only jump into the centre from a gateway system, which requires a starship with a fully charged Hyperdrive.

Each galaxy has several gateway systems and these can be located on the Galactic Map by choosing the Galactic Core as the destination. The player will be directed to the nearest one on their path to the core.

A concentration of star systems.

It is possible to find a concentration of star systems in the galaxy. Those concentration are extremely rare and have a colourful blur. It is unknown if those stars are any different from the standard. Multiple blue, red, and green stars can be found in these.

All star systems receive a random name from the initial seed. When discovered, they may be renamed by the discoverer. There are a variety of Star System Nomenclature options for choosing a star name, or random names may be chosen at will.

As with planetary discoveries, players are limited to 42 characters when renaming a star system.

The classification of star systems influences which space encounters can trigger when using the pulse drive of your starship within a system.