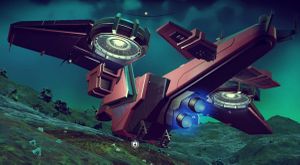 The Starship Catalogue is an index to discovered starships.

The following is an index of various starships discovered by different players.

Remember that each starship is available in all class grades, the maximum inventory size depend of the design of a ship, so it is important to know which design is best suited to you when looking for a new starship.

The inventory slot range is given for each type - information on the tech slot ranges can be found on the regular Starship page.

NOTE: Information based on game releases prior to the release of the Living Ship class.

Ships in this class have balanced stats, with no significant class bonus compared to the other archetypes. These ships look typically blocky and small with a square-ish canopy, though some ships in this class do sometimes use a tube-like fuselage.

The Inventory range for Shuttles is 18-23 for small and 19-28 for medium. As stated previously, Shuttles do not have a large inventory tier, but are great for starter travelers due to their cheap cost and increased low-tier inventory space.

Ships in this class feature a damage potential class bonus. These ships are the mascot ships of No Man's Sky, and are also the primary starships of pirates across the galaxy. The Fighter Parts Catalogue contains a list of nine body types, 18 ancillary parts, and three varieties of thrusters.

Prior to the Atlas Rises update, the game included three "Unique" ships, which are all members of the Fighter class. These do not spawn in systems, as they are either pre-order bonus ships or the Rasamama starter ship:

In the Visions update, the starter ship is the Radiant Pillar BC1

Ships in this archetype feature a hyperdrive range class bonus. These ships are the most unusual looking out of all the other starships, with some appearing bug-like and slender, while others feature massive engine block additions. Imgur author Sylvester Spaceman has created an Explorer Parts Catalogue.[1]

Ships in this class feature a shield absorb class bonus, and they also boast the highest possible inventory spaces. These ships are the largest out of all the other starships (other than freighters), and may or may not have wing features on them. Imgur author Sylvester Spaceman has created a Hauler Parts Catalogue.[2]

The inventory ranges for Exotics are 15-20 for small. Exotic ships do not appear in the medium or large inventory tier, but they have very high class bonuses (damage, shield and hyperdrive range).

Ships of this type are categorized by their "Organic" looking architecture. Their release was seen during the Melody Of The Egg quest, being added first secretly in the Experimental Branch on 18/02/2020. These ships utilize Biotechnology to function, having separate shielding, pulse engine, weaponry etc, with organic names.

Note: This type of ship can use black holes without requiring repairs.

Ships in this class are more expensive than other type of starships with similar size inventories, with prices ranging from 5 million to as high as 178 million units. They contain a decent amount of inventory spaces that hold twice the amount that starships can hold, and can be used as a mobile base including farming and other base-related functions.

The inventory ranges for Freighter are 15-19 for regular and 24-34 for capital. See the catalogue for more information about the sub-categories.

Frigates are larger than a single-user starship, but smaller than a freighter. They can usually be found surrounding an NPC freighter. A player can own up to 30 frigates once they command a freighter. Frigates can then be sent on expeditions to other star systems.

There are five types of frigates, each with their own specialty: Combat, Exploration, Industrial, Trade, and Support.

If you want to add Starships to the Catalogue, we suggest you to use this Template:Starship preload to simplify standardization and adding of multiple entries.