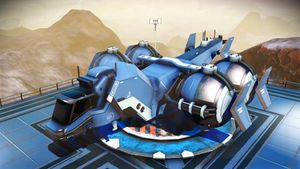 This page serves as a starship index.

The following is a list of various starships discovered by different players.

They are separated by general archetype, then by inventory size, then sorted in alphabetical order.

Remember that each starship is available in all class grades, the maximum inventory size depend of the design of a ship, so it is important to know which design is best suited to you when looking for a new starship.

The majority of logged starships will need no additional tag. For those that do, the following are the accepted tag values:

Ships in this class have balanced stats, with no significant class bonus compared to the other archetypes. These ships look typically blocky and small with a square-ish canopy, though some ships in this class do sometimes use a tube-like fuselage.

The Inventory range for Shuttles is 18-23 for small and 19-28 for medium. As stated previously, Shuttles do not have a large inventory tier, but are great for starter travelers due to their cheap cost and increased low-tier inventory space.

Ships in this class feature a damage potential class bonus. These ships are the mascot ships of No Man's Sky, and are also the primary starships of pirates across the galaxy. Imgur author Sylvester Spaceman has created a Fighter Parts Catalogue and says that for fighters "these are four main body types. Basically two variations of two types of canopies." [1]

Prior to the Atlas Rises update, the game included three "Unique" ships, which are all members of the Fighter class. These do not spawn in systems, as they are either pre-order bonus ships or the Rasamama starter ship:

Ships in this archetype feature a hyperdrive range class bonus. These ships are the most unusual looking out of all the other starships, with some appearing bug-like and slender, while others feature massive engine block additions. Imgur author Sylvester Spaceman has created an Explorer Parts Catalogue.[2]

Ships in this class feature a shield absorb class bonus, and they also boast the highest possible inventory spaces. These ships are the largest out of all the other starships (other than freighters), and may or may not have wing features on them. Imgur author Sylvester Spaceman has created a Hauler Parts Catalogue.[3]

Although every ship model in the game could spawn as S-Class grade, there are some unique models referred to as "Exotic" that only spawn as S-Class grade. If they spawn at all, they are limited to ONE (1) ship, per solar system. Exotic ships (when present in the system) usually appear in the first rotation of ships docking at a space station or a trading post.

The inventory ranges for Exotics are 19-20 for small. Exotic ships do not appear in the medium or large inventory tier, but they have very high class bonuses (damage, shield and hyperdrive range).

Regardless of specific archetype and visual model, ships spawning as S-class grade nearly always have largest class bonuses and inventory size in the game for their particular design. They're somewhat more likely to spawn in wealthier systems, and proportionally less likely in poorer systems.

Ships in this class are considerably more expensive than any other type of starship, with prices ranging as high as 400 million units. They contain an incredible amount of inventory space, and can be used as a mobile base, including farming and other base-related functions.

The inventory ranges for Freighter are 15-19 for regular and 24-34 for capital. See the catalogue for more information about the sub-categories.

If you want to add Starships to the Catalogue, we suggest you to use this Template:Starship preload to simplify standardization and adding of multiple entries.