There are multiple game-release versions of the Starship Catalogue - Exotic page. 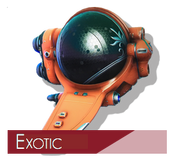 The following is a list of various Exotic-Archetype starships discovered by different players during the Beyond through current eras.

All exotic ships are part of the S-class and will have top tier bonus values in all three categories. Their values range between 35-50% DMG, 55-60% Shield and 50-65% Hyperdrive range. Since the price is multiplied by slot size and the exotic ships normally lack in that regard, their price range is a fair 10M-15M units. This makes them deadly specialists if one is lucky enough to find one.

While there are only two distinct types of exotic ships based on their cockpit, the community has come to differentiate visual classes with varying names. All of these classifications stem from the ship's nose instead of its additional ornaments. While there seems to be no real consensus how to name them, there is a broad basis in each group.

All exotic ships are part of one of two designs, either the squid or the ball (see below). Due to the equal chance of spawning an exotic and with only one per system, the many variations of the ball design seem to have caused the squid variant to be rather rare. With several special ornaments for the ball design, resulting in the Type-7 variant of either exotic type, the chance to find a squid type exotic is reduced even more.

NOTE: In some groups, the ship with tall upper fin also counts as its own "Tall" type.

The Royal exotic ship is one of three ball cockpit ships and is known for its prominent double nose. This ship design is presumably more common in Vy'keen systems.

It is available in limited colours of blue, red, orange, yellow and white/grey. Ships with golden or silver ornaments and the famous print of 7 on their top fin are also referred to as the elite Type-7. When seen on a Royal they are known as Royal Type-7.

The front fuselage of the Royal (it's long angular nose and ventral mounted lance) bears an uncanny resemblance to Spike Spiegel's Swordfish II from the iconic anime Cowboy Bebop.

The Guppy is one of three ball cockpit ships and its main feature is the lack of any nose.

While there are many variations of the Guppy, some more than others have gathered a following among No Man's Sky players due to the elongated rear and other parts making it more closely resemble a fish. It doesn't matter which one. It is available in limited colours of blue, red, orange, yellow and white/grey. Accent colours are either gold or silver. 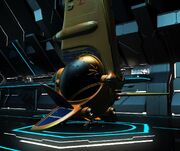 A Mosquito has the ball cockpit of the Guppy, but its main defining feature is a simple, small, needle-shaped nose.

Like the Guppy, it is available in limited colours of blue, red, orange, yellow and white/grey. Accent colours are either gold or silver.

Unlike the many variations of the ball cockpit, the squid only comes with its signature tentacle nose and a wide array of colours and some shades. Despite this lack of customization, in regard to the many additions to the ball cockpit, this has become a rather rare design. Getting one in a desired color makes this all the more valuable. The tentacles are telescopic, and fold when landed. To better see the accent colour on tip of the tentacles, it's best to view the ship during flight.

The following ships do not have the Exotic type specified, and need to be updated to include it.

Exotic ships of ball cockpit type have several other features in addition to the three main types of no nose (guppy), small nose (mosquito) and big nose (royal).

The ball cockpit ships come with no wings or two wings. A combination of two wings and a large top fin is often called a tri-wing. The underside of the wings covered in solar panels can be seen while the ship is landed and it's wings stand up in an angle. During flight the wings fold under the ship resembling a keel. There are mods to alter the position of the wings during flight, and even to animate them to flap like wings of a bird.

The ships with no wings have big, thick boosters or bottom fins with solar panels on both sides. The boosters open up in two halves when used and during hyperdrive. The bottom fins open their lids when the ship is landed, to charge their solar panels (no real effect in game).

On top of the ball cockpit there's either no fin, small fin or a large fin. Large fin resembles a wing in size and shape. The fin has decorations in either gold or silver, including circles, hexagons/honeycomb, sergeant stripes, acanthus ornament, and a small geometric picture plate with number 7 and perhaps a rising sun. The fin also has an underlined number 7 painted in red, which might make it hard to see in red ships.

Ball cockpit type exotics may have a large tail to completely encase its thruster, a narrow hood above the thruster, or no tail at all. The large tail opens up like a bird beak during flight.

Ships have two types of thrusters, big and small and they come in single or double sets. The big type of thruster is roughly thrice as long as the small one, and has a decorative ring in the accent colour of the ship, either gold or silver. The small thrusters are always black.