There are multiple game-release versions of the Starship Catalogue - Explorer page. 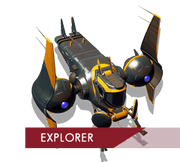 The following is a list of various Explorer starships discovered by different players during the Visions/Abyss/NEXT eras.

Ships in this class feature a hyperdrive range class bonus. These ships are the most unusual looking out of all the other starships, with some appearing bug-like and slender, while others feature massive engine block additions.

An example of a large Explorer ship.