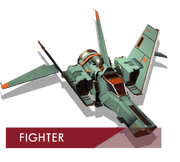 The following is a list of various Fighter-Archetype starships discovered by different players during the Origins eras.

Ships in this class feature a potential damage and a shield class bonus. These ships are the mascot ships of No Man's Sky, and are also the primary starships of pirates across the galaxy.