Strawberry Fields is a planet.

Strawberry Fields is an uninhabitable planet, located in [TWS-G-56] The Green Meadow. Due to its high gravity, life support drains faster than normal. There are no fauna to discover, but the vast quantities of Thamium9 make it a great resource pit stop. 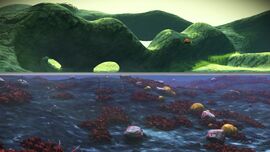 There is almost zero plant life on Strawberry Fields, except in the shelter of the caves. Large patches of Thamium9 grow on the surface, in stark contrast to the planet's tan dirt. Plutonium crystals can be found quite often, and Antrium presence in caves is average. Titanium crystals are rare, but large when they do occur.

There are potentially exotic resources in the cavern systems - scanners picked up the purple exotic icon but the lack of a Plasma Launcher prevented the discovery of what lay beneath the planet's surface.

While various spacecraft have been seen flying through the atmosphere, it is unknown if any alien buildings or ruins are present on Strawberry Fields.