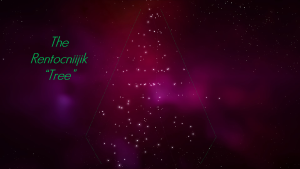 The "Tree" of Rento

Sub-regions (also known as Constellations), are smaller areas within the larger regions of the galaxies in No Man’s Sky. They may vary greatly in size, from a cluster of a few stars to several hundred systems; they are also often linked to, or perhaps defined by, distinctive visual markers (such as nebulae and dark absorption clouds), local political or community groups, or the collective discoveries of a single interloper. Their primary value is their use as a navigational tool, as well as a means for delineating areas governed by civic entities (such as the Galactic Empire of HOVA in the Galactic Hub).

There is currently no method for registering or naming identified sub-regions in the game itself; this can currently be accomplished only through online resources and community exchanges, such as the NMS Wiki and Reddit groups.

One of the largest and most widely-known examples of a sub-region is the “Christmas tree” of the Rentocniijik Expanse (pictured above) that forms the central navigational pillar of the Galactic Hub. Other sub-regions include: