Submerged Ruins is a Point of Interest found underwater.

Submerged Ruins is one of four types of Points of Interest that can be located using the Nautilon's High-Power Sonar.

Three Sealed Sea Chests can be found underground, beneath the base of the ruins structure.

Submerged Ruins has a platform, Similar to Plaques, Ancient Ruins or Monoliths, that can be interacted with to initiate a lore sequence with "Refracted Light".

When prompted, if the player chooses to "Accept the waves" they will be presented with a short dialogue sequence with ocean-themed, but otherwise unclear origins. Upon conclusion of the dialogue, the player is awarded one Trident Key.

Dialogue does vary between visits to various Submerged Ruins. 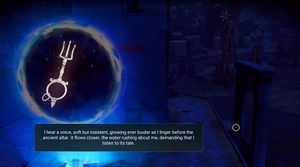 The Voice of the Shell

I hear a voice, soft but insistent, growing ever louder as I linger before the ancient altar. It flows closer, the water rushing about me, demanding that I listen to its tale.

One of the following will be included in the base dialogue. The sequence is taken from the game file.

This dialouge is chosen after all eight possible dialouges are experienced by the player.

Note: This part of the dialogue needs further research, please help expanding it.

The Voice of the Shell

The voice speaks, but the words no longer make sense. Whatever song the sea now sings, it does so in a tongue beyond my comprehension.