Sugas-Uomi is one of the many procedurally-generated planets in the universe of No Man's Sky before the change of the generation seed.

It is a planet with mountainous areas, yellow grasslands, green atmosphere and many red trees. It is located in the Keyti system and was dubbed 'E3' by Sean as he discovered it at E3 in 2015.

Sugas-Uomi appears to be a non-toxic planet whose atmosphere consists of 53% Oxygen and 47% Hyglese. 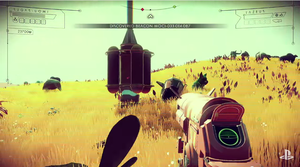 Other structures include a Trading Post, and a building similar to an observatory.

This planet displays yellow grass, and many trees with red leaves. Also in evidence are mushrooms, flowers of red and yellow shades, and shrubs covered in red foliage. 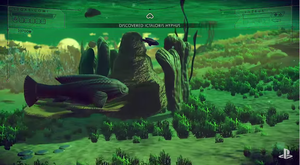 Sugas-Uomi is home to many species of quadrupeds including Bos Curvicus, as well as various types of sea-life. Two species of fish were discovered by Sean at E32015: Ictaloris Hyphus, and Ictaloris Alyptil the first being dubbed the 'E3 fish.'

The following element is known to exist in rock formations near the beacon: