From No Man's Sky Wiki
(Redirected from Suit)
Jump to: navigation, search
The subject of this article is from the Living Ship update.
The information from this article is is up-to-date as of 6 April, 2020. 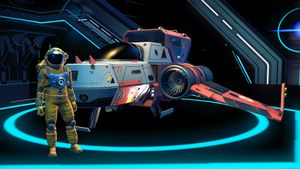 The Exosuit is the outfit that a player’s avatar wears in No Man’s Sky. It provides storage for items that an avatar carries; offers protection from planetary hazards, hazardous flora, hostile fauna and aggressive sentinels; and comes equipped with a jetpack. It has expandable inventory capabilities and its technology can be upgraded. Whatever creature exists within an Exosuit is never seen, so the Exosuit essentially doubles as a player’s avatar. Avatars can be customised at Appearance Modifiers on Space stations.

In addition to technology-based systems, the Exosuit is equipped with systems which, though they are not represented as a basic technology, provide fundamental functions for the Exosuit's wearer.

The Movement Systems enhance the mobility of the Exosuit's wearer. Two systems are classed as Movement Systems: the Jetpack (already mentioned in Components) and the Speed Augmentation. Both require power from Life Support to function.

The Speed Augmentation, also referred to as the Adrenal Pump, grants the wearer the ability to sprint for a limited time. Sprinting drains Life Support faster than walking, but the drain is not as severe as that incurred by use of the Jetpack.

The Defence Systems, also called the Defensive Systems, protect the Exosuit's wearer from nearby hazards and threats.

Attacks on the wearer will first deplete the Exosuit's deflector shield, which automatically regenerates after a hit if the wearer is able to avoid further damage for long enough; alternately, the wearer can instantly restore some shield strength by activating a Shield Station or destroying Combat Supplies canisters dropped by Sentinels. The remaining durability of the shield displays in the upper-left corner of the heads-up display as a white bar whenever it is not at full strength.

The Exosuit initially begins with 3 core health squares and a shield with either medium strength (Normal mode) or low strength (Survival and Permadeath modes). Missing core health, whether caused by damage or by installation of core health upgrades, can only be restored by using health-restoring objects (including, but not limited to, Health Stations and the white boxes in Cargo Drops).

The Aeration Membrane provides supplementary oxygen for the Exosuit's wearer whenever they spend more than a few seconds submerged in a liquid (usually water). Its benefits are short-lived compared to those offered by Hazard protection; however, the Aeration Membrane's oxygen supply, displayed as a light blue bar when it is not at full length, can be replenished underwater by interacting with Candle Kelp (the plants which are harvested for Kelp Sacs).

The Exosuit has three separate inventories. Items are easily moved from General inventory to Cargo inventory and vice versa. When selling items or recharging components of the Exosuit, Multi-tool, or Starship, it does not matter in which inventory the items are stored.

General inventory is where acquired items first appear. These include items that are bought, harvested, looted, received in trade, or received as a reward[1]. New players begin the game with 24 General slots and three of those are occupied by the core Life Support, Hazard Protection, and Jetpack units. An additional 24 slots can be added to General inventory, for a total of 48. Additional slots are purchased on space stations or obtained for free after repairing planetary drop pods.

Cargo inventory is the opposite of Technology inventory. Slots in this inventory cannot have technologies installed into them; in all other ways, they act similarly to slots on starships and Exocraft, making them ideal for bulk goods storage. New players begin the game without any Cargo slots. Legacy players can add a total of 25 slots to Cargo inventory. All other players can add up to 48 slots of Cargo inventory. Additional slots are purchased on space stations or obtained for free after repairing planetary drop pods.

Same upgrade module, but one protects against heat and the other against cold

For Life Support, Movement and Shield modules, each individual module has a bonus attributed to it. Bonuses vary and it is possible to find two modules of the same type and class yet both have different bonuses.

For all other upgrade modules, each individual module has a protection bar similar to that of Hazard Protection. The module's class determines how effective the protection bar is at absorbing specific environmental effects. The modules require regular charging for continued function, though they usually accept charging materials which occur on the planets requiring additional protection for prolonged visits.

As a further complication, both types of Thermal Protection Modules have the same name in-game – buyers should read their pop-up descriptions before purchasing them to ensure that they are purchasing the correct type. 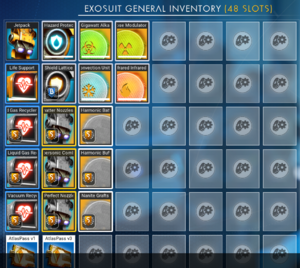 Only three upgrade modules of a given type may be installed in each inventory. Technology upgrades from blueprints can only be installed in one inventory. Having more than one of each hazard or protection supplement will extend the time a player can survive in an environment before needing to recharge them. The protection bar for each module of that hazard type will decrease one at a time until all are empty, at which point the main hazard protection module will begin to decrease and the suit will alert the player. The recommended layouts shown here do not use all technology upgrades from blueprints, but they are representative of how players should plan technology placement to maximize both module count and Upgrade bonuses.

There are seven types of Exosuit blueprints. The first five types can be obtained from normal blueprint sources.

The last two types cannot be obtained except by completion of the storyline.

NOTE: At launch and through Atlas Rises, there was a different technology upgrade system in place. Upgraded parts were labeled with “Sigma”, “Tau”, and “Theta” to denote their potency. Life Support systems were recharged with Thamium9 or a consumable power source.Hazard Protection systems were recharged with oxide elements, such as Zinc, or with a “Shielding” consumable, such as Shielding Shards. Next has overhauled the upgrade system to what it currently is.