Suyam ElcaGMS is a star system in No Man's Sky.

Suyam ElcaGMS is a star system in the No Man's Sky universe. It was originally discovered in 2016. There were significant changes to the planet environments and a reset of discovery data which became apparent during Synthesis era visits. It is currently a Korvax Abandoned system

By PC explorer SaruMaaSTM sometime during 2016. It was later explored and first documented by CELAB Galactic Industries. 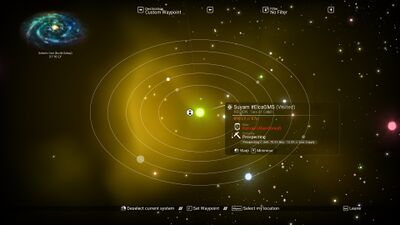