Suyaritut UF925 is a planet.

Suyaritut UF925 is a large maleficent lush planet more evil than Maleficent herself. It is located in the star system Shlido-Tiyom on PC Version No Man's Sky universe. This planet is deception personified. Just look at how truly beautiful and gorgeous it is from space! It looks like an in-game Planet Earth!

Don't be fooled or lured by its beautiful allure. Again, this planet is deception personified. The moment you land here, deadly headcrabs will greet you with the intent to KILL. Beavers with bioluminescent antennae will maul and decapitate you to death. Truly horrifying giant goat monsters will thirst for your blood. And if you managed to jump into the water, Water-type graboids will eat you for breakfast, lunch and dinner. As if that isn't enough, the planet's Sentinels will eliminate you on sight, even if you're at the deepest depths of despair. 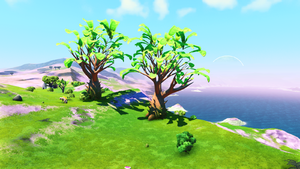 Suyaritut UF925 is a large oceanic lush planet. It has sizeable landmasses, around medium-large in terms of size. The underwater ocean floor is relatively rough and jagged. The geological features of landmasses are far more interesting. There are plenty of hills, scattered all over. Some hills are a bit peaky and lofty, but they never reach the height of mountains. Occasionally in-between or outside hill ranges are relatively wide areas of plains, some of them rolling a bit. Majority of the landmasses' coastline tend to go up the hills, but there are still many highly scenic beaches scattered around.

The soil is somewhat nutrient-rich. Grass sprawl over majority of the land, but there aren't that much trees or even shrubs and wildflowers. This may be due to the occasional heat storms. Still, with the trees and shrubs scattered at a distance from each other, it gives an impression of being in a steppe, with grass seemingly spreading all the way to the horizon. Interestingly, Kelp Sac is found in great abundance underwater, sheltered from the heat storms.

Caves are relatively plentiful as there are hills everywhere. This makes finding Iron, Cymatygen and Marrow Bulb relatively easy. 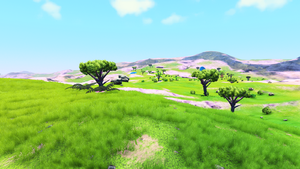 A pleasing mix of Earthen colors results in quite a gorgeous sight.

The planet has Earth-like colors, but not an earth-like climate. The atmosphere has clear, beautiful and eye-pleasing sky-blue skies. At night, it's dark, though not overly so. This is due to the star's overly intense brightness slightly lighting up the night sky, as it's WAY TOO HOT due to being an O0p-type star.

Most of the time the weather is gentle, but the occasional heat storm can occur.

Temperatures range from 24.0C during the day, going down to ???C at night. When a heat storm occurs, temperatures soar to ???C. 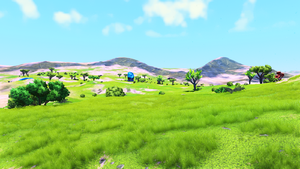 Exercise caution when exploring around.

Hello and welcome to the GREEN HELL. If you're feeling suicidal, you can land in this verdant lush TRAP of a planet and get ready for a near-endless onslaught of predators and sentinels. It's highly recommended to be quite geared to survive here. Otherwise, leave.

As you walk around the planet's beautiful verdant grass fields, get ready to be stalked by headcrabs hiding within the grass. Angry beavers worse than Daggett and Norbert's behavior when in murder mode combined are ready to maul and decapitate you. The scent of blood and fear will attract giant hideous goat monstrosities, as these things are always thirsty for blood. All of that while being chased by the planet's frenzied sentinels. Do not even think of escaping into the water. Graboids that have adapted to the planet's liquid oceans are ready to kill, along with many venomous water snakes.

If you can deal with all of that stupidity, then get ready because this planet is quite a treat. You'll have the urge to run around the expansive steppes this planet has to offer. There are quite a lot of hills too, providing a nice view of the surrounding area and the oceans in the horizon.

The best way to travel around is by Exocraft. Due to the sheer number of things that want to KILL YOU in this planet, it is best appreciated while being in safety.

This planet has highly dangerous fauna with excellent killing capabilities. There are FOUR kinds of predators here, along with an infestation of vine whip plants.

Shlido-Tiyom is a peculiar blue star that has... something strange that turns good men, women and children into apathetic chaotic evil husks of rat excrement. At the heart of all this evil is the root and true cause of all this stupidity, the planet Suyaritut UF925, a large oceanic lush planet that looks like a verdant paradise from space. This vile, evil land hides something so absurdly powerful, anyone that enters its parent star's gravity well is sure to go amok. How can such a beautiful paradise do such things? It's still a mystery. Not a single brave soul has explored the planet and returned alive, and there is no documentation of whatever goes in this planet or its parent star, as they all get caught up and destroyed in the perpetual forever war that's been raging on since the birth of such a maleficent world.

Ezegnegch was allured by the beauty of this planet. Though he has A LOT of experience as an explorer, soldier and as a living being, he still isn't strong and brave enough to even consider just LOOKING at it, despite experiencing the destruction of his former home, the Sugaikinovi Fringe. He even mentioned it is even WORSE than Roszugiesp Gihaina. Through sheer willpower and extreme resistance to temptation, he is able to escape the planet and the star system alive, being the first ever being to do so with his mind, body and sanity fully intact. All he can say is... DON'T YOU DARE ENTER SHLIDO-TIYOM, OR ELSE A TERRIBLE FATE WILL MEET YOU. MERELY UTTERING OR EVEN THINKING ABOUT THE PLANET'S NAME WILL RESULT IN IMMINENT DEATH.

On certain weeks, the planet emits an absurdly powerful and deep noise that reverberates throughout all of Hurenima. The noise varies in volume depending on the distance from its parent star. It sounds like a deep, evil and malevolent heckling laughter. When this happens, bad luck occurs throughout the system as if by magic. Hurenimans are used to this, and they have adapted to the circumstances. Fortunately, even such power is no match for the great dark cloud that surrounds the region. However, Hurenimans are still thankful that such an incomprehensibly wicked planet exists, as they grew tougher against unfavorable situations. They're also thankful that despite such power, it's still not enough to break through the great dark cloud that surrounds the region.

Since the secretive Hurenima region got revealed by a disgruntled Ezegnegch, there is nothing but chaos and disorder. Many invasions and wars have been fought but they all lead to nothing but utter death and destruction. Right now, most of the once wealthy hidden region is in ruins. Thanks to the countless space debris falling down to the surface, the formerly lush planet has turned into an irradiated wasteland with a new name: Dextanthe Riyak. Despite its new looks and name, it is still the same maleficent world as ever. Thanks to the fall of the once mighty Black Cloud Commonwealth, its influence grows even stronger. It can now be felt in nearby regions. At the back of everyone's mind, a whisper. A few words, and it's not good.

Thus is the legacy of Ezegnegch, now leader of the Eyfert Khannate. They say he got influenced by the planet and caused it all. Now they're on the hunt. Except nothing's going to come out of it because he is in a different galaxy.

This video shows a helpless traveller fall victim to this EVIL MONSTROSITY OF A PLANET. Watch him helplessly try to escape from the clutches of its maleficence and bloodthirsty creatures. At space, he finds himself in the middle of the system's perpetual war. Did he escape? That's remains a mystery.