Synn is a planet. 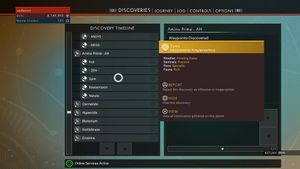 Synn is a planet located in the Amino Prime system, capital of the Amino Hub. It was discovered by KingJamesHova and is a location of a portal marked with comm terminals.

The planet has 100% zoology completed that can be scanned and obtained by players. It was also the prior home base of Amino Hub Leader Niblet2121. It contains rich and aggressive fauna that is difficult for players to deal with at times. An initial brief survey was completed by SpaceArtGek who was busy completing zoology in April. More to be added over time. 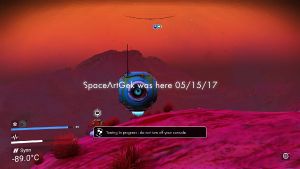 An aggressive weather and animal planet. Matches it's name quite well. 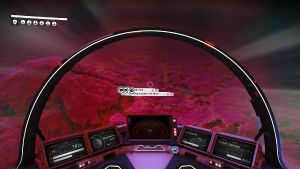 Flying towards the comms on Synn

Water underneath the planets surface? We also speculate that this system was named by King Hova in honor of leader of the Galactic Hub.