There are a number of planet descriptions shown on this page for Mega Exotic worlds, which also appear on Biome - Exotic, under [the sub-heading of the so-called "Glitch"-type exotic](https://nomanssky.gamepedia.com/Biome_-_Exotic#Glitch). I think this "Glitch" type should be removed off the Exotic page and merged in with this "Mega Exotic" category. Regarding the name revision, I think it's most appropriate to simply call this entire biome the "Anomalous Biome" as opposed to "Mega" or "Gaia" or "Chromatic."

You forgot your tag... that aside: NO. Glitch encompasses ALL biomes of exotic, the true exotics and the chromatic worlds... which are outsourced to Megaexotic in this case. So if you have a hybrid car you don't randomly sell it as a gas car or an electric car... you sell it at both as a hybrid car.Thamalandis (talk) 16:23, 1 July 2019 (UTC)

The "Mega Exotic" as of Visions is the LAST grouping that still has alternating surface features. All former Exotics are now grouped in fixed planet types and show one visual. Further studies also prove that all "ME" follow the gaia planet type and weather and do NOT all have huge stones, plants or animals. Thus the general term "Mega" is not correct. I would propose the term Exotic Gaia or Exotic Lush... something to reflect its actual property. Mega structures are part of the RNG, not a guarantee. Only the discolour is standard and guarantee for all. I mean we could call them "Chromatic" biomes as well. Colour is the ONLY connected feature.Thamalandis (talk) 01:56, 28 November 2018 (UTC)

I see this page was created August 13th and it cites that the biome was confirmed in 1.55 patch. I see no mention in the 1.55 patch notes of the term "mega exotic" or any confirmation of any details about it. What I am calling into question here is the notion that the hue of the atmosphere is intentional. I was located on such a world running 1.54 on PC that had hazy blue sky, blue structures rising from the ground, massive, etc. Colorful near and far. When 1.55 installed, the world changed to a sepia tone not only for the objects in the world but my ship as seen in 3rd person external view and also in photo mode. But the telling thing is, in Photo mode with Default color filter, as in in-game play (which as of NEXT is the Default filter only), things had this new sepia look, but in other filter modes that are in all other worlds similar to Default (Vibrant, Filmic, Vintage) the world's previous palette can clearly be seen.

These biomes existed since NEXT launched, but in 1.55 the visual filter for in-game and only the Default photo mode filter changed. This seems clearly to be a glitch.

I created a video that clearly demonstrates the disparity between the Default filter and the other, mentioned filters in the Mega Exotic biomes. I have submitted this issue in several bug ticket submissions with video link, screenshots, and other user accounts to Hello Games.

Photo examples from the world I was on in the PC 1.54 patch when the 1.55 patch landed, showing a before and after.

Below, first photo shows a mega exotic planet planet BEFORE 1.55 patch (1.54) and the following five photos show the same world AFTER the 1.55 patch. Note that the world's pre-1.55 palette is revealed when filters other than Default are chosen in the game, post 1.55. This has to be a glitch. 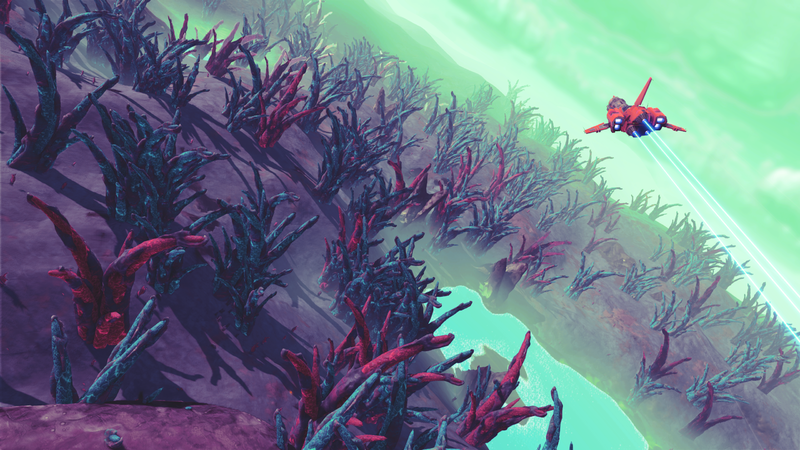 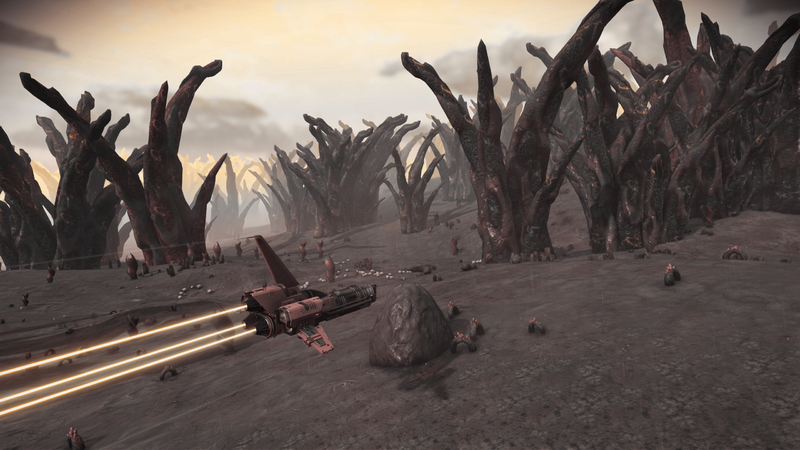 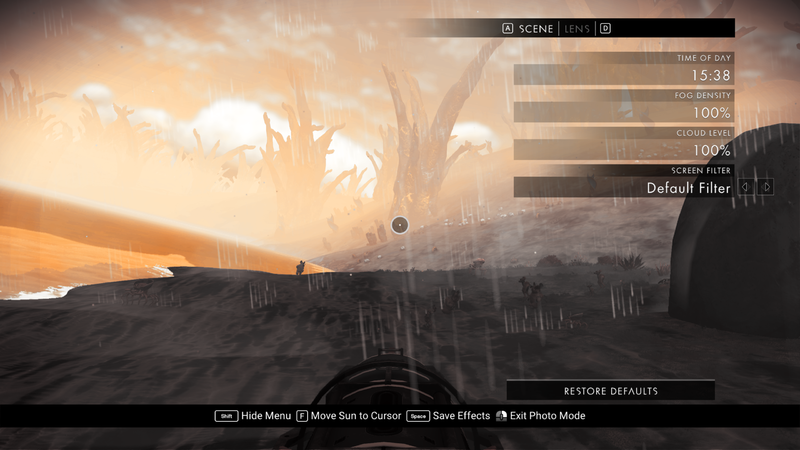 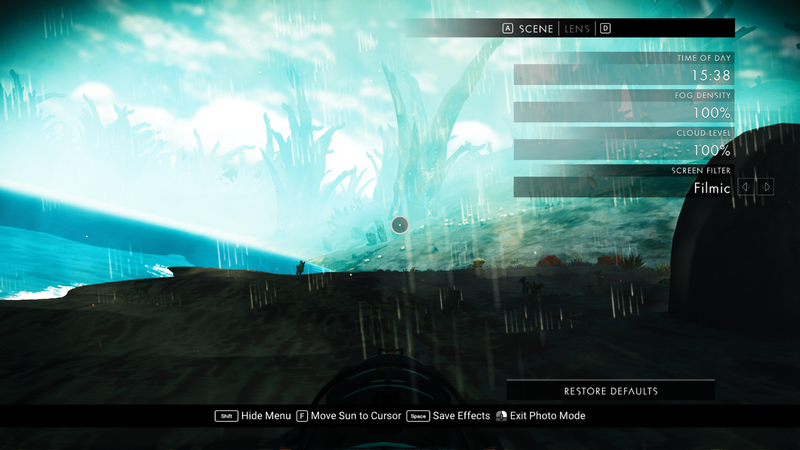 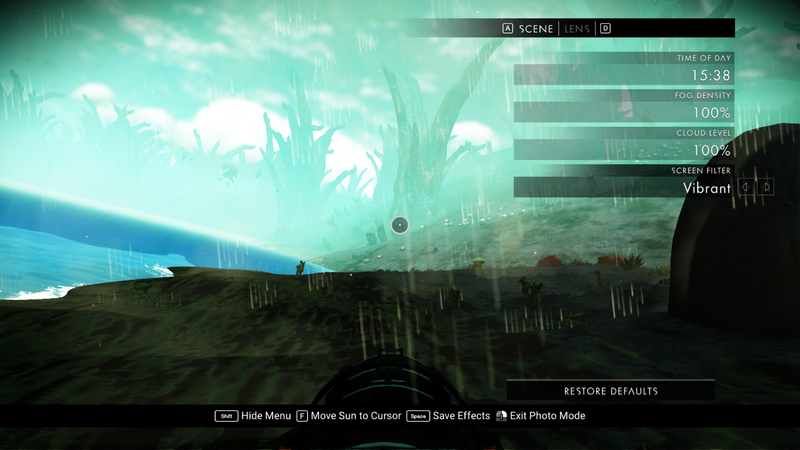 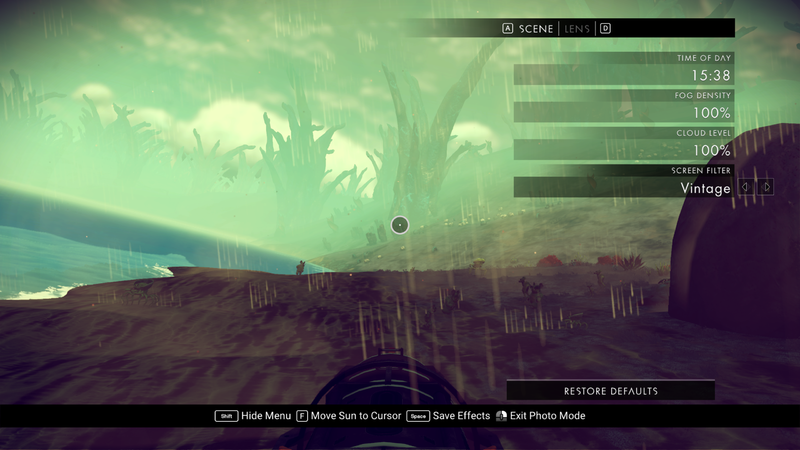 It certainly appears that filters other than Default (and in-game play is Default filter only, as of NEXT) reveal the earlier palette of the world. Every such biome I've encountered since 1.55 has this same sepia color situation -- after 1.55.

I don't know the true name of this biome, which is why I gave it the Mega Exotic name. They did exist when NEXT was launched but their planet types were similar to dead planets. If you looked at the history of the Biome page, you'll notice that I called this an "Unknown Biome" kind of planet. After 1.55, Hello Games must've changed the planet types to their real form while also tweaking how they look.

Personally, I think what they did is intentional and not a glitch.

The default filter is what the planet is as seen from the eyes of the traveller. Then switching to vintage/filmic/vibrant filters (and maybe even looking through the analysis visor) reveals the planet's real colors, not necessarily their colors before 1.55 as shown in the screenshots below. After all, they're supposed to be anomalous, stellar corruptions. 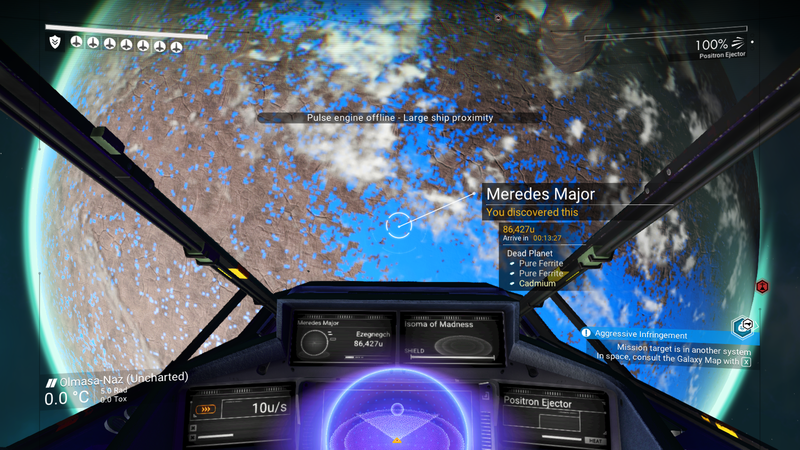 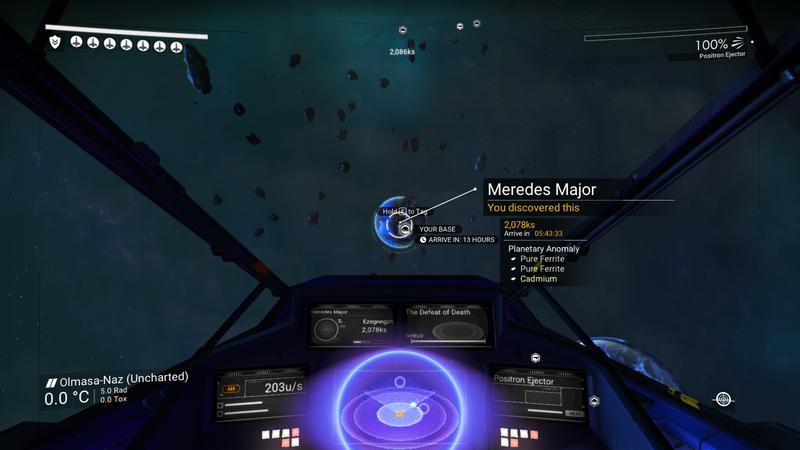 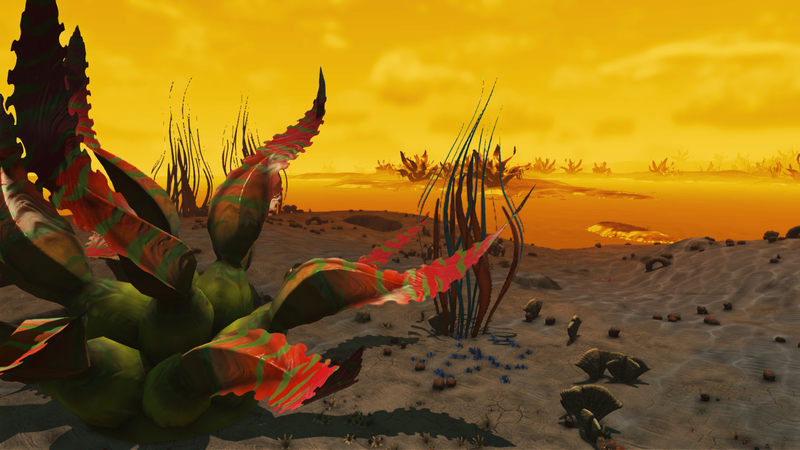 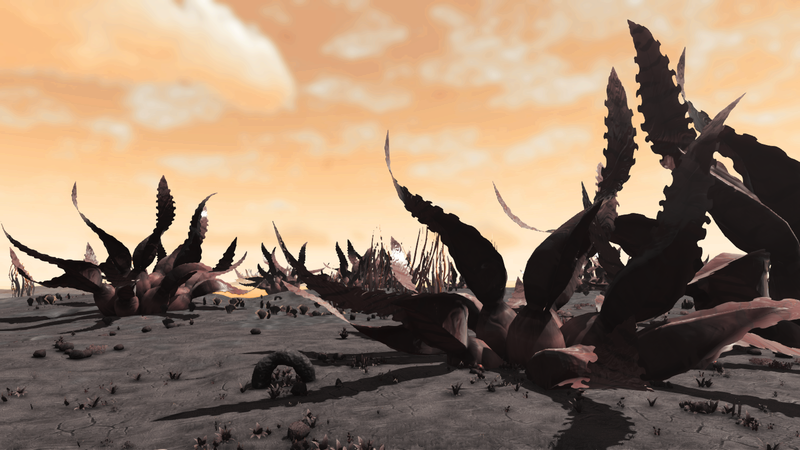 Meredes Major, 1.55. They toned down the bright yellow to a more relaxing orange color. Default Filter. 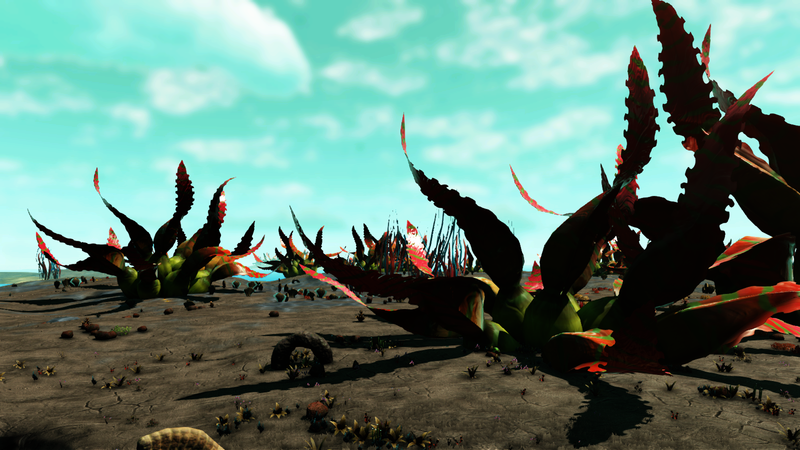 Same screenshot as above, but with the Vibrant Filter. 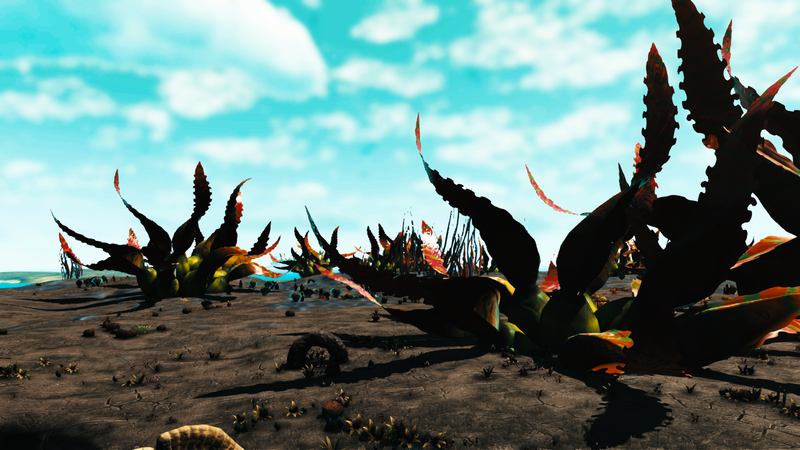 Same screenshot as above, but with the Filmic Filter.

Interesting. Note that the top photo I posted (1.54) is using default filter and that's how the world looked in-game, not just photo mode. I wonder why that planet was not at all sepia or greyscale? It's curious. I do not doubt the time you indicate your screenshots are from. I am now more confused. I pinged HG on this so hard with tickets and tweets that if it is indeed a glitch, they are aware of it. Perhaps it's not a glitch. I hope it is, becuase I think the more colorful renderings in-game are more pleasant, but I guess we'll see if it gets changed or not. Thanks for the further info.

I have concluded that this was intended by HG at this point, and I am appreciating it on some of the worlds I've found. Now, the Aug 15 PC Exp update just landed and it says visual improvements to some extreme biomes. I wonder...is this effect still there?