Tasyroga is an inhabited star system.

Tasyroga is a star system at the end of the Alpha meridian in the Euclid galaxy. It is the lower extreme coordinate for the Alpha Spiral and one of the cornerstones of Euclid. It lies directly at The Fade and is otherwise known as Alpha Minoris.

The system is under supervision of Ensign Mux and Ensign Unjin of the local Vy'keen navy. They are meant to vet the other to prevent corruption. After the wild west had passed the system and all prey had been hunted, the more aggressive government style followed in its stead. With a strong hand and a steady patrol, the pirates never dared to return. Today this pocket of the galaxy is one of the safest places to be. To its shame the anomaly ravaged its blue pearl Skjelacamen. But the Vy'keen take it with a salty grin. Now the planet is much more fitting to train a true warrior! The security is HIGH!

Aboard the space station the Vy'keen redesign led to an emphasis on greenhouses instead of the splendor and decadence of the former botanic gardens. A true warrior is ascetic! 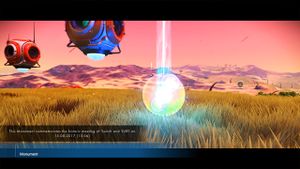 The system was under supervision of Warrior Baq. To the pride yet disfavor of its warriors, the system had been pacified and all worthy prey had been eliminated. Accordingly a more ordinary military government took over and routine set in. The more wild warriors left to find new challenges as the great hunt was over. This in turn made the few local Gek traders follow them. The hunting party was the best customer.