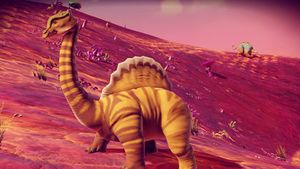 This predatory diplo/Rangifae species was originally discovered on PC by Kuradin, who shared its location. On PS4, it was then discovered by Syn1334 on a planet discovered previously by AndyKrycek.

They are often found hunting both alone or in small groups of 2 or 3 individuals. As is only really seen in predators of genus Rangifae, it will lower its neck to be nearly level with its shoulders before charging its prey, extending its head far forward in the process. Like most small predators, they don't hesitate to hunt (and often kill) prey larger than themselves.

The Non-uniform gender has spines connected by skin on its back and forelimbs, and similar, smaller frills on its neck. The Symmetric gender has only a dorsal "sail," with much less evident spines. Both genders are fairly small diplos, mostly yellow with brown stripes, with the stripes more densely concentrated on their neck.