The Technician is a hireable Vy'keen NPC character related to exocrafts and is the mission-giver of the Exocraft Technician mission. They can be found in Vy'keen systems, but any Vy'keen on a space station can be a Technician. 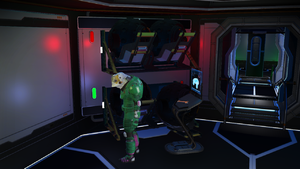 Example technician at their terminal.

Before hiring a Technician, there are the following requirements:

The Technician gives the following blueprints in order: