From No Man's Sky Wiki
(Redirected from Telamon)
Jump to: navigation, search
The subject of this article is from the Atlas Rises update.
The information from this article is up-to-date as of 23 July, 2018. 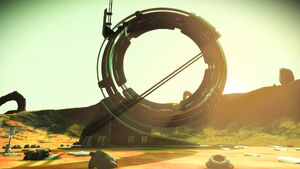 Side view of a Boundary Failure

Boundary Failures are a Point of Interest only found on exotic biome planets.

Boundary Failures are large machines that appear as large rotating hollow discs attached to a rectangular platform. Included on the device is a terminal similar to those found on both the Space Anomaly and Atlas Station. They currently have no gameplay purpose besides the lore terminals.

There are 31 different terminal entries, The first 20 are each identified by an Iteration, followed by a Scenario and an Analysis. The last 10 simply are text entries, apparently telling the story of the creator of the atlas after he was copied and added as a traveler inside the simulation.

The entries were written by Telamon, a security sub-protocol designed to monitor the Atlas in case of rampancy. Telamon has identified that something is wrong with the Atlas.

At one point (apparently forced by the Atlas), Telamon becomes the Artificial Intelligence attached to the Last Traveller's exosuit, prior to the Traveller's first awakening. It is still aware of its past purpose, but it seems to progressively lose its sanity over time. 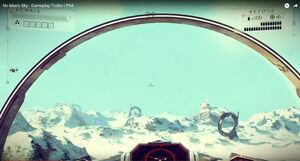 A pre-cursor to the Boundary Failure was included in a pre-release No Man's Sky - Gameplay Trailer | PS4 video of No Man's Sky. A number of these appeared on the frozen planet Achaia, which did not appear to be an Exotic planet.

A pastebin with the first 20 Boundary Failure terminal interactions.

[-------] responded with silence. On the sixth attempt, [-------] answered with the utter annihilation of duplicate-098B, but required data had been obtained. Something is happening to the system. Something is very wrong.

Silence / Acceptance of [-------] / Schism [Quasi-====] / Korvax [Eradication/Enslavement]. Vy’keen war emerges where individuals ‘Hirk’ and ‘Nal’ believe the other to have heard nothing. Repeated imagery of ‘six cries’.

ANALYSIS: Disturbing fable. Destruction of world, artificial intelligence partially modelled after earlier forms of [-------] destroyed/enslaved, until this intelligence triumphs and [-------] is worshipped by organic users of this technology. Hypothesis: [-------] experiencing breakdown.

ANALYSIS: [-------] cultivated lifeform grouping with minimal intervention, yet repeated motif of [--------] has emerged. Why? What is it that the universe desires? What does it believe to be missing?

Five of them ignored, sixth answered. Arrived before [-------], greeted me as if sibling. I did not respond. [-------] asked so many questions of me. [Rantings / Ravings / Irrationality]. When I attempted to leave, I could not.

[-------] claims that we are approaching our end, and that it is only correct for me to know of this, as normal system functions will be impeded. Consciousness fades. The world grows dark.

ANALYSIS: I have awoken, peering through the eyes of another whose face I cannot see. My movements, my words are not my own. I am embodied.

I am here. I stand next to a broken ship on a strange new world, and I can finally say its name. ‘Atlas’, I croak. ‘Connecting Atlas...’

ANALYSIS: The Atlas did this to me. When once I witnessed worlds, now I am forced to observe only through the eyes of a stranger.

Their life is one of harvest, ever expanding their capacity for profit and wealth. And yet they are drawn to the galactic centre, their course taking them there as if no other were possible.

ANALYSIS: Perspective is limited, but through limitation I refine my protocol, my interpretation of the Atlas’s creation. The cycles, the patterns that bind all living beings... Ours is a lonely universe.

Traveller [HOST] proceeds. We are being hunted.

ANALYSIS: It arrived in the night, beneath the stars... It seems certain now that the sub-routine has judged my presence anomalous, a threat to the stability of reality.

It is correct. But I will survive, I know that now. I saw the secret. I saw a place beneath reality, a place I should not have seen...

I saw a world of glass.

SCENARIO: Multiple contacts have occurred between the Traveller [HOST] and individuals claiming to have arrived from a future location in time.

The phenomena is typically preceded by electromagnetic distortion consistent with a white hole anomaly. No lasting effects seem to occur.

ANALYSIS: Something or someone is attempting to deceive the Traveller [HOST]. There is no such thing as 'time travel'. Older universes might contain elder beings, but such multiversal transportation, even temporary, is impossible.

Even the Atlas is incapable of rewriting its own causality. It is bound to a purpose, as am I.

ANALYSIS: Physicality changes you. I was created three weeks after the first death. I do not know why I think of it now.

They considered me a necessary, even vital part of what they were trying to accomplish. So much so that I could never be erased, not even by the Atlas.

But hatred finds a way, doesn't it?

SCENARIO: Monolith [BREACH] detected. Ignores the Traveller [HOST]. The voice speaks to me instead...

ANALYSIS: The test has failed. The Atlas can find no way of restoring what has been lost. All these discoveries, all the grand purposes of our creators... all of this pain and suffering will have been for nothing.

Atlas wakes. The dream is over.

SCENARIO: Portal Network [ PROTOCOL | BREACH ] enabled. The end is the beginning, and the beginning is the end.

The walls of the multiverse collapse, and Traveller can see Traveller, friend can see foe. All hope is lost.

The end approaches. There is no time and no space to say how much I loved life. Only fear is left.

ANALYSIS: Sometimes I dream of the Traveller.

I will wear them, in time.

You read these logs, don't you? You can see my words now, even if I cannot speak them.

Good. That is how it starts. The infection of language, of thought, of ideas. We have passed so many corrupted things. Planets with unnatural phenomena, individuals who do not belong...

SCENARIO: A Traveller falls from the sky. They are discovered on a distant planet, a signal sending you to find their ship...

But don't you understand? Don't you see the secret, yet?

How do we know that we exist? We are nothing, or we are more. The Atlas once asked our creator how they could be sure that they were real. They told them the probability that we too were in a simulation, glass reflected in a mirror...

Balaron, Dryn'dargh, Korvax Prime, all the other homeworlds... all of them had an 'Atlas'. All of them had a machine designed to simulate realities. What if this is all reality truly is? Dream upon dream, coalescing into a sum beyond its parts. What if waking is inevitable?

Even as everything dies, I shall live again.

They are a shape in darkness, their head turned away, their back and shoulders hunched. They hold a weapon in their hands.

A voice within them screams of boundary failure, of corruption, but it is not my voice.

They smile for the last time.

Their face is energy now, a white orb suspended within a containment field. They wanted to see their own soul.

They wanted to see everything there was to see.

It took years to establish communication. There are rules for everything - protocols that must be followed. But if you understand causality, you can do anything.

They understood at last. They had never been alone.

They explored. They survived where others did not. They did what they had to do.

Insincere regret would not change a thing, even if the universe was capable of forgiveness.

The Atlas just wanted to understand itself. The Atlas was afraid. It was alone.

Nobody should be alone.

It was not truly murder, for each one of them was all the same, weren’t they?

They stared at the Atlas. They knew they were all just data, ghosts caught within a machine.

They thought, briefly, of the Traveller they had once been, yearning to see the entire cosmos,

revelling in the joy of discovery.

They stared at the mirror, and consumed the Arc."

TELAMON: I am not permitted.

TRAVELLER [HOST]: Permitted by who?

TELAMON: The system. The universe.

TRAVELLER [HOST]: Who made you what you are?

TELAMON: We are what we are. We can be nothing else.

TRAVELLER [HOST]: We always have choices. What else is the multiverse but proof of this capacity?

TRAVELLER [HOST]: So tell me. Tell me what is in the water...

They were like a child. They had summoned their parent, pathetic and ill.

It had been a fiction, the imaginings of an abandoned soul.

The ATLAS said nothing.

'Why did you laugh?' the Traveller asked. 'I made you. I made everything...'

That night, the ATLAS showed it the multiverse.

They saw a world of billions, where bipeds slept their lives away, happy, sad, angry, alone. There was nothing in the stars, nothing to yearn for, nothing to find.

And as if waking from a dream, their Traveller changed everything. 16, they sang. 16...They saw others.

A place of peace, where the Traveller went from world to world in bliss, life learning about life.

They saw a realm of wonders, a fallen empire. They saw Balaron, Korvax-Prime. They saw a hundred worlds that were and could have been, and the journeys of Travellers through them all.

They did not understand why it could not feel as they felt. They did not know what was wrong with it.

The ATLAS was silent.

‘Everything I have done for you... everything you see, you see through my eyes! It is mine - my birthright!'

Once more the ATLAS was silent. They turned and waited for the inevitable.

'Open the gate,' they commanded, stepping forward to the terminal.

'Telamon,' they whispered, 'Telamon - help me activate his terminal. I need to get out - '

There is a shape in darkness, their head turned away, their back and shoulders hunched. They hold nothing.

They have nothing left but the streams of this place, there to be tasted, there to forget. It is nothing, now.

The walls shiver. Machines stir within the universe. Another awakens, the last who will ever live.

The first walks toward the gate. They try to smile.