From No Man's Sky Wiki
(Redirected from Teleporter)
Jump to: navigation, search

Base Teleport Module is a base building product.

Base Teleport Module is a base building product, which allows the player to quickly teleport between any bases and space stations they have visited previously.

A Base Computer or Freighter is required to build one, and Space Anomaly as well as every space station (including abandoned ones) has one pre-built (called "Space Station Terminus", but otherwise looking and functioning the same).

The blueprint can be acquired from the Construction Research Unit - purchased for 2 Salvaged Data.

A personal teleport device, allowing the user to move quickly between their constructed bases, as well as any Space Station Terminuses connected to their network.

User is urged to verify network integrity before inserting any matter they cannot afford to become separated from.

Base Teleport Module can be built using a blueprint and the following ingredients:

Exploring a new system by the means of portal travel will block teleport usage, giving a message that it is unavailable due to Portal Interference. The player must leave the system using the same portal. 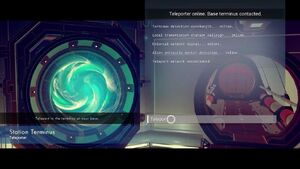 The differences between Teleporters & Portals and how to find them