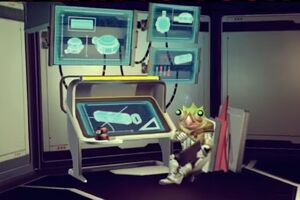 Terminals in No Man's Sky are electronic work stations that allow specific game functions to be completed. There are a variety of terminals, resulting in a variety of possible uses.

Terminals found in Abandoned Buildings provides the player with a series of logs from a random long-dead Traveller. After reading each log, the player will receive Nanite Clusters.

The Agricultural Terminal is used for farming of various resources such as Sac Venom and Gravitino Ball. It is used by a hired NPC known as a Farmer. These NPCs can be recruited in Space stations or Trading Posts within Gek controlled systems.

The Communications Station provides the ability to compose and transmit short messages to other travellers who may pass by the station. They are often abbreviated as Comm Stations.

The Construction Terminal is used for basebuilding-related items. It is used by a hired NPC known as an Overseer. These NPCs can be recruited in space stations within Gek controlled systems.

The Exocraft Terminal is used for creating and upgrading Exocraft. It is used by a hired NPC known as a Technician, who may refer to themselves as a Mech-Priest. These NPCs can be recruited in space stations within Vy'keen controlled systems.

The Fleet Command Room is used to direct the frigate fleets of the player.

The Frigate Terminal is used to determine which components of a frigate have been damaged, and the requirements needed to repair it.

Galactic Trade Terminals are scattered across planets, space stations, and trading posts. They provide quick electronic access to galactic markets where items of various types may be bought or sold on the open market.

Players can build these terminals on a base or freighter.

The Science Terminal is used for specialized research, and for the creation of science-related blueprints. It is used by a hired NPC known as a Scientist. These NPCs can be recruited in space stations within Korvax controlled systems.

The Transmission Tower terminal is used to provide various rewards, assuming the player can solve the presented mathematical puzzle.

This terminal is used to provide customisation options for freighter, including the ability to recolour it. It is found on the freighter's bridge.

The Weapons Terminal is used for weaponry and explosives. It is used by a hired NPC known as an Armourer. These NPCs can be recruited in space stations within Vy'keen controlled systems.