Terrain is a varying feature of planets in No Man's Sky.

The terrain of a planet can differ greatly and influences a Traveller's ability to explore them. A planet can have multiple stretches of terrain over the entirety of its surface and it is independent of its biome. Planets may show at least up to three types of terrain simultaneously.

Terrain still follows the basic design of land or ocean terrain. Oceanic terrains have their own sub-biomes below the water and offer a different topography than their land-based counterparts for their water regions. This is unless they fulfill a certain depth criteria and become lakes and rivers.

Currently there are three possible types of planets and one distinguishable subtype. Albeit only three have been observed and documented. 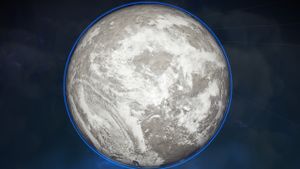 If a planet has water, it adheres to a continental or semi-oceanic structure and will have at least one sea or ocean with its according terrain. There are no more pangean swampworlds, riverlands or wetlands as they existed in Atlas Rises. A pangean planet is easily distinguishable by its entire lack of water when observed from space, it is one giant landmass. It seems all moons adhere to a default pangean structure, as do dead worlds and true exotics. 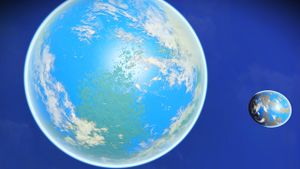 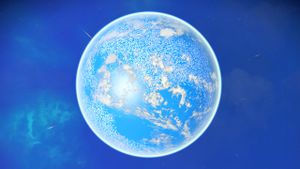 A continental planet is defined as a mixture of ocean terrain and land terrain with most, if not all, terrain for the land being completely connected. They are easily discernible from space due to their earth-like appearance. Often times the land will be engulfed in clouds, especially on the dayside. They do not reflect actual storms on the planet!

All water worlds share a groundwater level with their oceans. If one does not land on a hill which limits the depth one can dig down before the bedrock, it is always possible to reach the water with a Terrain Manipulator. Some terrain types even offer underwater cave systems below continental areas. 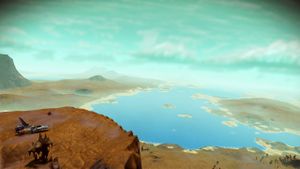 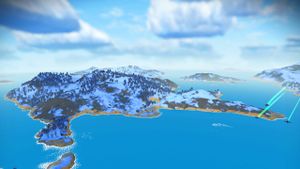 As a terrain type shared between true continental and semi-oceanic worlds, the mountainous archipelago mainly features small channels or lakes of water which surround most of the land which is structured as islands. Sometimes two or three islands are connected by small and shallow land bridges, but most of them stand on their own. Unlike an island ocean terrain they are big and close together and all of them sport hills which resemble volcanic archipelagos in real life. If most islands are connected and surround their lakes, that would be considered a mountainous wetland. It is more common on semi-oceanic worlds due to the high water level.

A hypothetical world-type as of now, the ocean world is a planet that is entirely covered in ocean terrain types. While there are some borderline cases of semi-oceanic worlds made up of archipelagos only, there hasn't been a true ocean planet as of yet, which would be represented visually by a pure water appearance from space. Its existence can not be ruled out, just like true ocean worlds were discovered before in Atlas Rises. Due to the higher prevalance of terrain types per planet, they might just be very rare. 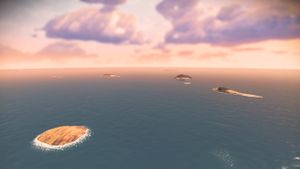 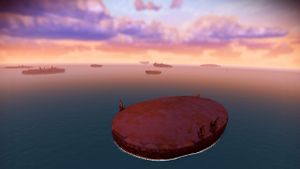 Island chains are one of the most common oceanic terrains. While none of them can be seen from outer space, the moment a ship closes in on an ocean chunk they will be calculated and visually represented. Their size can vary. There are island chains with many small islands and chains with midsized islands. All of them rise from the ocean floor in both shallow and deep oceans and can range from one island in several hundred units to a cluster of islands in one spot. Even though there is always a general fluctuation in the number of islands, two visual representations of the island chain terrain are mostly depending on their origin. If an island chain borders another ocean terrain it will slowly fade out with fewer and fewer islands with increasing distance until it ends. This also happens if two island terrains border each other. The island chain will fade out, stay faded out and then pick up again after a while in the next terrain. For the untrained eye this can make it hard to discern if a terrain ended or if several island chains border each other. If an island chain borders a continental terrain, it will instantly cluster and never fade towards the mainland.

A special subtype of the island chains are the floating island chains. They only appear on planets that show the archetype of gravity defying islands on land terrain and will also appear in the ocean regions. There they replace areas where reef terrain might spawn and also appear partially in the normal island chains. Planets that have these floating islands are seemingly unable to produce a reef as the floating islands always spawn on top of the water level and effectively replace it. Their actual appearance underwater however is not the same as on land, as they are indeed connected to the ocean floor. Yet they retain their odd spherical shape above the seabed. 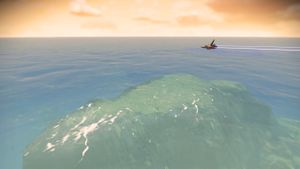 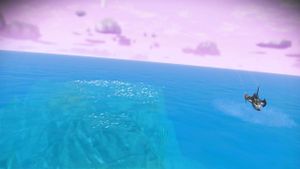 As one of the few purely oceanic terrains in the game, the reef is also the only one known that is devoid of any land and thus non-traversable with the spaceship. Not unlike the island terrain, several hills rise from the ocean floor. However, in a reef terrain they never break through the surface. Some reefs look natural, especially in shallow oceans. There they gently come to the surface but never break through, all the while forming more or less natural shapes for hills as if they had been generated on dry land.

The special subtype of the reef terrain suffers enforced submergence. A forcefully submerged reef will have a flat-topped seamount (mountain that is totally submerged), which is the result of pre-calculated islands that would otherwise have reached past the surface being truncated at a certain depth below the water level. Since this can also happen for deep ocean islands, this can lead to giant spires reaching for the surface as eerie and unnatural plateaus.

To found a base here, one must raise the terrain above the water level to build a Base Computer. Since a spaceship cannot be used, the best choice to reach the location would be the Nomad hovercraft or the Nautilon submarine. Reefs are the perfect spot for an underwater base if one likes a clear view without islands in the morning.