The Bez-Harr Concern is a civilized space community.

The Bez-Harr Concern is an amorphous region of space, located close to the Galactic Hub in the Munsfelkha Band, founded by Swagohod and Artnik.

It was established pre-Galactic Hub, and was in contention as a possible location for the Hub.

Primary is Piebreijoitia, a black hole system, which contains the planet Rashimant Erjul, meeting place of the founders. The secondary system, a black hole binary denoted "One Hole Over" is located 271.3 Ly towards the center. 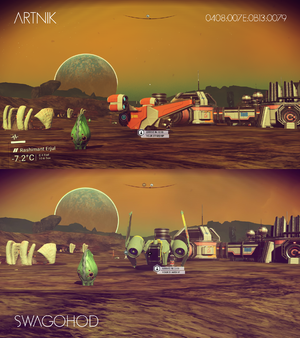 The historic first meeting of the founders on the planet Rashimant Erjul.

The activities of the Bez-Harr Concern mostly consist in the naming of star systems, planets and natural elements for "amusement".

The founders claim no political or economic dominion over the space contained within the boundaries of the Bez-Harr Concern, nor do they wish to exert military control. They simply state that the systems within are of their concern.

The Bez-Harr Concern invites all entities to partake in the journey to also make this region their concern.

The Culture of Naming[edit | edit source]

It is a common cultural practice of the Bez-Harr Concern to name systems they discover, but to leave the planets for other Interlopers to name. To the Bez-Harr, the naming of things for amusement is their primary pursuit.

Often the systems they discover are named for a theme, and the Concern rejoice mightily as the planets take on names that reflect the associations of those who come after the Bez-Harr.

In the Galactic Hub, one such system is [BHC-G-1A5] Pet Peeve Declaration Zone, 3 planets, class-G4pf in the Zoliforwe region. The Bez-Harr look forward to the naming of those planets for the things that annoy the entities that visit the system. 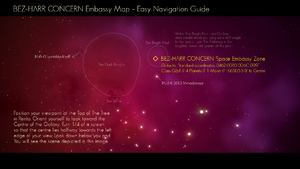 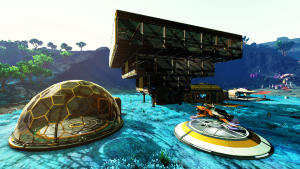 The Bez-Harr Concern has made an exploratory expedition to the HUB, and has opened a permanent embassy.

After the establishment of the Space Embassy Zone, the system quickly came under threat from the Galactic Empire of HOVA. Response from the Bez-Harr Concern continues to be that they "remain unconcerned."

Early in the "Harsh Buds War" conflict (documented officially in HUB TIMES), the Hov began an aggressive disinformation campaign, releasing videos purporting to show Bez-Harr attacks on Hov ships. The Concern decried the blatant posturing, and continued to invite all entities within the Galactic Hub to visit the Embassy and chillax in the legendary Visitor Centre, which was ultimately destroyed.

The Bez-Harr ultimately lost the war, and at this time the Bez-Harr Amabassador Artnik is still missing.

The Bez-Harr Concern publishes infographics. These include:

HUB TIMES: The Official Newspaper of the Concern Diplomatic Press

Endless Twilight, a guide to finding the pole of a planet and experiencing extended sunrises and sunsets.

RENTOGRAMS, a guide to creating simplified navigational diagrams for traversing the Galactic Hub.

WANTED: KING HOVA, a poster released by the Rento SenPoPo

Call for Truce, the official parley document that lead to the end of the Harsh Buds War.