The Fédération of Euclid

The Fédération of Euclid is a civilized space community.

"The Fédération of Euclid" does not aim to be linked to a single region, it also spreads over all the other federated domains without prevailing over them or changing their current hierarchy.

It is a gathering of independent pilots and other free groups of people, they establishing a primary order based on the vote of all citizens living under these same laws. The federal order is instituted when 55% of the population have accepted this ideology, that obliges all the federal citizens to vote the laws during large assemblies eventful. Laws are promulgated for one system only, thus allowing citizens from the same federal group to choose the laws of their own system. However they can vote for expeditions in non-federated systems or even vote for attacks one of the systems of the empire.

The main purpose of "The Fédération of Euclid" is to prevent the empire from gaining ground and baffle them in their mission to terrify more free people... the tyrants threaten us again.

The actions of a free and strong group can stop them!
The life of our future generation is the most sensitive resource in that universe,
tortured and exploited by the empire they has no chance to have a brightfull tomorrow.
Come join the federated people and fight the threat of a blood-soaked empire!

The main system of this federation is Cetionshol and the planet Euanta principal.

Built on the planet Ognortl tau, the assembly aims at permitting the vote of the citizens and to open a zone of debate much more appropriate. Open to all the inhabitants of the system and to federal travelers, the monument is also intended to show our political and aesthetic capability to all the others federal factions.

The presence of a federal group in a system can increase its commercial, social, and political stability, thus generating a significant investment effort. This also the risk of presence of Pirates and the number of illegal acts committed for profit. The increase of freedom and profits have a negative impacts on the security. 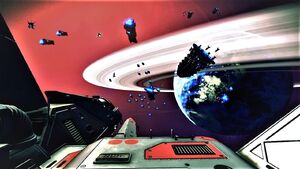 Join the Fédéral Navy of Cetionshol !

The Federal Navy was founded after the birth of "The Federal Assembly of Cetionshol" , it aims to fulfill the military demand of this one. Every citizen who has reached the age of 25 has the right to enter the Federal Navy , a certain amount of units and military equipment are given to the recruit to carry out his federal service.

Navy funding is primarily related to its management of exploration information and the sale of experimental medical materials. But some large public financial groups and owners of private money funds also spend millions of units to guarantee the maintenance of this political group. Keeping political and military stability is very successful for their different businesses and they use funding a part of the navy for this purpose.