From No Man's Sky Wiki
Jump to: navigation, search
The subject of this article is from the Living Ship update.
The information from this article is is up-to-date as of 6 April, 2020.
This page fills the role of Embassy for a Civilized Space community. The information found here represents a user-created civilization that is a creative addition to the game.

The Indominus Legion is a civilized space community.

The Indominus Legion, also known as The Legion, is a player-made faction located in the STVANCUL region of the Euclid galaxy. Created to add to the NMS multiplayer community, either for those wanting to explore, play, or just mess around within the game; The Legion offers an RP progression system within the Faction, in which you can attain rank, grow throughout the Legion, start your own story and even command your own Armadas. 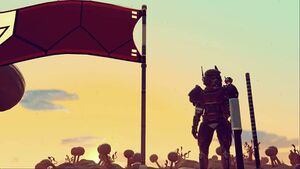 Our mission is to bring and expand upon the NMS community, both online and in-game, to enhance your own and the multiplayer experience across ALL PLATFORMS. Be it RP, PvP or PvE, you should be able to have fun with the Legion!

For a background of the Indominus Legion, refer to this history page.

Members of the Legion are encouraged to name their systems using the prefix "The Indominus Legion: Terra Quarter" followed by a Roman numeral.

The Legion uses Roman numerals up to 13 (XIII). Once the number 13 is reached, the following system will have the main number and a secondary number. The secondary numbers also go up to 13.

(Custom named Quarters are possible but have to go through the Primus Cartogriphan).

For planets and/or moons, members of the legion should just add the prefix "Indominus" before the planet's or moon's name. Roman numerals may also be used, if needed.

The Indominus Legion offers a wide collection of ranks and also specializations, that the player may choose once they reach a certain rank.

These ranks, except "The Primus" and "The Lord Emperor" ranks, may be attained by completing the Legion's missions, given in the Discord server.

The ranked specializations are areas/regiments/specializations you may go into once reaching the rank of Centurion. They allow you to advance in your own specified arc, and choose a sphere to focus on, for example, we have law and policing bodies, special forces, engineers, traders... Etc.

These specializations have their own rank trees, being Primus (specialization) the leader of your regiment/specialization, the High, Grand or Captain ranks, the second in commands, usually up to two or three, then you have your ranks ranging from I - V or 1 - 5. I or 1 is the first rank and V or 5 is the highest without being a second or Primus. You can advance in these trees by doing specialization specific missions to advance, whilst still advancing your Core or Base rank throughout the Legion. Entry and rank increase for within your specialization is up to the Primus of that specialization themselves.

These regiments allow you to further grow your character, enhance your multiplayer experience and role with us, specialize in areas of your own expertise and immerse your adventure throughout No Man's Sky... It is not compulsory, and yes, there is nothing wrong with waiting to find the specialization you like, but we recommend diving into them once you reach the rank where you are able to!

We accept any and all who may want to join! We are a project to bring the communities of NMS together, to expand the community and to help you not only share, but make your story as well!

Play on PC, PS4 or XBOX? We are welcoming to any and all platforms! Find friends among our Legionary brothers and sisters, play and build together, bring your own glory to the Legion!

Want to make a suggestion to your role with us? We shall find a way to accommodate you! Want to be apart of the RP or not and just chill with the community? We shall give you a home!

Achieve our rank roster and join us officially by attaining the Discord link below!