The Indominus Legion - Background is a history page.

The Universe hosts a great many mysteries, tales are forgotten, histories are lost, and entire civilizations wiped from the cosmic memory. Among the abyss of secrets, lays a darker text...

The Vy'keen, the famed warrior race, only matched by their might of the Sentinels; or at least as is apparent. While the Vy'keen maintain their dominant military stance, another power bared a great threat to this and their respected strength. This power contained a daunting presence and gave the Vy'keen a feeling they often left forgotten... Fear.

The Indominus Legion, supporting their crimson blood banners, they marched the void and scourged the Euclid galaxy as if routine for this new Imperium. It is unclear whether they originated from the Galaxy of the first, but they were more than eager to demonstrate their view of sharing their new home through fire at the Vy'keen! But all was not in despair, conform and the trade would be your life. Deny the new authority, and your existence would be purged.

Knowledge of the Legion was little to none before their grand announcement, yet somehow mustering up the endless fleets of destroyers and death-giving dreadnaught craft. Violence was their initial response, but not towards the Vy'keen, instead, they offered their peaceful hand to allow the Galaxy to conform first, aiming their demonstration of military prowess through the ultimate destruction of a heavily occupied sentinel world. Orbital bombardment saw efficient eradication of the current ground force deployed and the entirety of any outpost remnant that remained there.

All three of the dominant species were left to view this marvel of destruction, the current beings in the system left in a frozen state as the Red Fleet positioned itself toward the systems space station and its accompanying trade frigates. An offer to join their Legion was broadcast to all and any capable receiver within the system. Immediately, a small mix of lone ships was seen individually heading towards one of the leering Warships, a frigate or two following of the lower class and those of no or little allegiance towards the three races choosing their lives over their heritage. 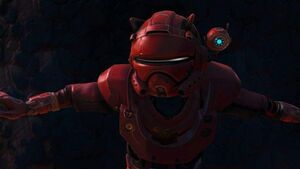 Not all saw the same way, while the demonstration was supposedly targeted towards the sentinels, many other beings were caught in the blazes that scorched the world. This left a sour taste with the higher authorities of the Vy'keen, Korvax, and the Gek; instead, they defied the Indominus Legion, choosing to stand their ground and announce their lack of hesitation to respond in kind for the Legion's murdering act.

Rather than destroy those in the system there and then, the Legion chose to retire itself from the system, once again, disappearing into the void. A few years passed before their presence would be made known again, not believing their lack of compliance was with their lack of diplomacy, but with their lack of a larger demonstration of their true might. Thus began the Vy'keen's start to feel, fear.

In what appeared to be a coordinated attack, a close cluster of Star Systems faced the peril of the Legion, much to the confusion of the other races at first, the targets remained only to be Vy'keen, the attacks were harsh and fast, starting with small skirmishes between fighters, only to weaken the defending military forces, allowing each wave of the Legion to grow in size and number, Capital Warships harrowing down upon the Vy'keen, incinerating their assault craft.

The overwhelming number soon saw the Vy'keen destroyed or forced to flee their Systems, leaving nothing but the crimson flag to bare over the fallen worlds. As the Systems around them fell, watching as the believed-to-be most formidable warrior race fell with such ease, the Korvax and Gek controlled systems around were quick to move out of fear and conform to the Legion. With a strong cluster of Star Systems now firmly controlled under the rule of The Indominus Legion, the Legion could now ready itself for the rest of its conquest.

The other Empires were quick to realize the strategy the Legion had chosen to utilize after the brutal campaign that had just taken place, by targeting the largest known military faction within the Galaxy bar the Sentinels, reducing the biggest threat to the Legion's mission to control.

As the years carried on, more Star Systems fell to the Legion, the Vy'keen being the examples to be made of, while the following factions continued to conform through correctional fear. The drawn-out wars of the Vy'keen and the Legion began to leave its scars, however among the other races, the lack of their direct involvement allowed them to grow bored and with less and less care to the great threat that had hardly presented itself to be so since the initial landing. Other more direct issues were raised, internal affairs, trade, and money crisis' became the larger concern and with that, the Korvax and the Gek began to ignore the Legion as best they could.

Instead of blindly submitting more worlds, the other races instead did not go to the Legion once the Vy'keen surrounding had fallen, and much to their surprise, were left alone despite the minor convoy passing on the outer limits of the System. None the less, the other races left them be and in turn appeared to be rewarded the same; whether they'd be next after the Vy'keen, this would not be a concern for them for many years to come at least.

With no help seeming to come from their neighbors, despite their ill relations prior to this new invasion, the Vy'keen snarled in detest at their Korvax and Gek cowards, but in brute honesty, only attempting to hide their fear as they faced their enemy alone.

In the beginning, the Legion had offered a place among their ranks for the alternate species of the Galaxy, whilst the Gek and Korvax turncoats served quite comfortably; even when the Xenophobia was made quite apparent, they served unto their Legionary Overlords. As for the Vy'keen, with many being quite quick to join the new malevolent and war-loving opposition, this came at a price. A huge portion of Vy'keen warriors found themselves turned over to the dominating Legion, kept into their own regiments, believing it to be an honor; little did they realize they were being made cattle...

As the Legion grew to such a strength that the need for alien species became quite meaningless to them, the Vy'keen that had joined the Legion began to realise the true evil of the Legion. Within a system that has no name, upon planets that were marked damned, the Legion sent every regiment of Vy'keen there accompanying all and any of the Vy'keen prisoners of war; it was here that the Legion had broadcast publicly, the mass execution of all their Vy'keen prisoners, to be carried out by their own kind. Such a task proved too much for many that had been sent there, with a decline of the order, this lead to almost twice as many of the executions that had previously been expected. 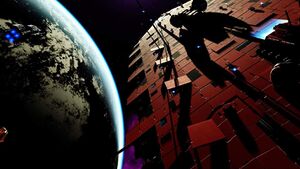 The gorefest was unimaginable, as the warring race watched as their own kind were mercilessly slaughtered at the hands of their own brethren, being ordered as if as many slaves as the prisoners they had murdered. Only then, was it to be decided by all, that the Legion would have no remorse towards any of the other races, nor stop at the genocide of the Vy'keen. The Indominus Infernal himself, brought his Capital vessel, the Incenidium and the rest of his fleet to begin bombardment upon the remainder of the Vy'keen on the Damned Worlds. Every regiment, every one of the warrior race were laid to waste, leaving next to no trace of their existence but the charcoal-like flake of their bones being swept by the winds of the planet.

Such a massacre lead many of the joined species to leave the Legion, despite the punishment of discarding the will of the Indominus Legion, the damned System that had seen one of the largest massacres that would take place during this war, proved too much. Resistance groups gained vast numbers, and even the support from the main cores of each of the species. The Legion had claimed a lot of territory in such a short time, but was still small in comparison to the rest of the Galaxy...

As time went by, the Systems became harder and harder to capture, some of the more most outer reaches of the Legion's hold started to fall as Vy'keen resistance groups grew larger and gained the support of the surrounding Star Systems. The Legion later found that both the Gek and Korvax had started to accompany the Vy'keen on their lead for a defensive assault. The battles were not easy, no victory came quickly, nor easily, and many were bloody if not stamped out by the cold vacuum of space.

The strategy of destroying the Vy'keen had worked till now, the Legion was not entirely unprepared in the event that the remainder of the Galaxy turned on them, but their barbaric nature, their rush to war, and violence had left them vulnerable and without much tactical advantage against their suddenly enlarged enemy.

Systems fell back to the Vy'keen, some being given up to the other races for aiding in their conquest where other payment could not be mustered. Ultimately, the end of their long string of Galactic wide victories was to come to an end. System by system, the Legion was being pushed back, until eventually, upon the last couple of System they had left, the three races halted their attacks, managing to ground all of the remaining forces of the Legion, their ships destroyed or confiscated. 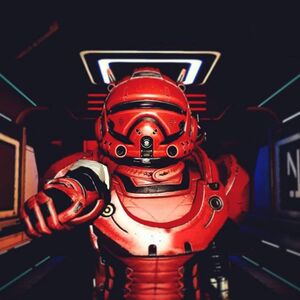 With the Legion defeated, the Vy'keen were left to deal with them as they see fit, and despite all of their hatred and lust to end them as the Legion was prepared to do the same, the Vy'keen still held a great sense of honor in their warrior-like culture. Seeing the defeat, seeing that their old enemy had nowhere left to go, this war was over, even granting them their own few Systems to have to themselves to grow their own kind within, and for the first few years, were heavily monitored and taxed for their crimes during the war.

An enemy, once feared and unmatched on their incredible malevolence, had been defeated, for all their might had lost where victory was assuredly promised... But this was not the end, nor a defeat for the Legion...

The Legion had faced down the entire Galaxy and publicly declared war upon all of those within it, they had managed to hold their own and dominate every and any System they could have chosen. This was not a defeat, but a birth, the Legion was but a child, a young babe that had merely cried out... Now, now it has matured, it has grown up, twice the ships, twice the size, technology supplied beyond the bounties. The Legion, we... Have been waiting, so patiently, preparing. The first war, we learned and the second war had already begun as soon as you allowed us to survive!

Compassion will destroy you, impurity will disease you, we are the purge, we are the remnants of purity, and we shall cleanse the Galaxy of all of that which defies us; the Atlas does not dictate us, we are the impossible allowance. Prepare; for the hands of eternal fire shall welcome you to our gift of torment!