From No Man's Sky Wiki
Jump to: navigation, search
This page fills the role of Embassy for The Qitanian Empire Civilized space community.
The information found here represents a user-created civilization hub that is a creative addition to the game.

The Qitanian Empire is a civilized space community.

The Qitanian Empire (Qitanian is pronounced Kee-Tay-Nee-An) is a Civilized space community and a reason-minded, pacifistic civilization originating from the Qitand-Tus star system in the Oefergia Boundary region near the center of the Euclid galaxy.

The Qitanian Empire is always open for contacts and alliances with other civilizations that wish to peacefully co-exist and benefit from each others' wealth and knowledge.

Qitanians describe their civilization as a "free Empire of the people’s choice" and are an advanced, modern society focused on science, exploration, documentation, architecture, and arts.

The Qitanian Empire is the first player-created civilization in the universe of No Man's Sky with an own language. A basic Qitanian dictionary can be found here.

The official emblem of The Qitanian Empire was created by PC Qitanian Shruik/Kappa-Spock and introduced on Feb 21, 2020.

The emblem represents the Empire and the Qitanian spirit with the use of a clean and pure white/gold color scheme, precious crests, and the official ship of the Qitanian Knights of the Good Light as a reference to our will to both explore the new and defend the known. The ship's jet trail forms a line that turns the Good Light's eternal circle into a golden “Q”. The diplos, the Geknip symbol, and the Atlas stand for our love and appreciation to all the known and yet-to-discover wonders and mysteries of our universe, and the image of our beautiful capital planet Hemiti Q 35 in the center shall remind us that although there is an almost infinite universe to explore - there’s no place like home, and no feeling like coming back to it.

In March 2020, the Empire officially discovered and claimed the Gaquang region near the center of the Euclid galaxy and Exploration Fleet scouts are currently in the process of mapping, documenting and colonizing star systems in this area of space.

Our mission is to gather and share as much knowledge as possible about the universe we live in. We run and support several supply farms in the Euclid galaxy and are known to be patient and helpful advisors regarding any topic related to traveling, exploring, aviation, base building, and technologies.

The NMSQitanianHelpCenter subreddit is a place to contact Qitanian advisors for help and advice.

The Qitanian Empire proudly supports and practices the growing and harvesting of NipNip Buds as well as the production and consumption of GekNip, for example at the Empire's own La Hacienda 96 NipNip farm and leisure area.

An important part of the Qitanian culture is the production and consumption of Qitanian Whiskey, a beverage brewed from ingredients (Star Bulb, mordite, and water) found on or originating from the capital planet Hemiti Q35. The Qitanian Whiskey is usually stored in wooden barrels and traditionally served 24/7 at all Qitanian bases and supply depot bars.

The Qitanian civilization was established by and named after Qitan, a legendary demigod who is said to be the son of Yelah, a woman of Hemitian descent, and what is referred to as “The Good Light of the Galactic Core”.

An example for a depiction of an Ayath'em entity, found in an ancient scroll.

Qitanians dressed in their traditional colors

Members are encouraged to name star systems with the prefix "Qitand - ", which will declare the suffix as "owned/claimed by Qitan" in the Qitanian language.

The official colors of The Qitanian Empire are gold, white, and black. Qitanians are encouraged to use these colors for base building (see The Qitanian Capital Base), character design and on starships.

The Ayath'em Totem depicts members of an ancient, pre-Qitanian civilization which are called "Ayath'em (the old ones)". Ancient cave paintings depict them as the first sentient species that ever inhabited Hemiti, but it is unclear if they were humans/animals/hybrids or even travelers from distant corners of the universe or an alternate reality.

Qitanians use that Totem as a spiritual decoration for their bases, especially when they want their builds to be recognized as of Qitanian origin in non-Qitanian space.

The Qitanian Knights of the Good Light 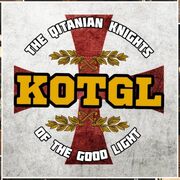 KOTGL supply base on a weekend mission planet 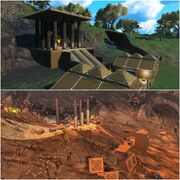 The Knights of the Good Light (KOTGL) are the Qitanian Empire's own ingame security service and welfare organisation. They descend from members of the Order of the Good Light, an ancient brotherhood of Qitanians who had dedicated themselves to the study and practical application of the laws and forces that run our universe as well as gratouitously sharing their wealth and knowledge with all living entities.

The brotherhood of the Order of the Good Light was very aware of respecting, protecting and preserving all living things, and as legend has it, they found ways to develop and use supernatural powers like telepathy, telekinesis and spiritual teleportation. Early members of the order were contemporaries of Qitan and had probably been taught to use these powers by himself; his descent and strong spiritual connection to the Good Light of the galactic core might even have empowered him to telepathically transfer some of his abilities to others.

After Qitan's physical death and his return to the Good Light, the order grew in its activities and member count and successfully spread the Qitanian spirit in the then-known universe. The order operated from a temple on planet Navede in the Qitand-Tyr system one short warp from Qitand-Tus, where they trained and improved their powers and abilities. But centuries of experiments with inter-dimensional reality-shifting, summoning and preserving rifts in time and space, and thereby weakening the boundaries between dimensions lead to a reality breach that destroyed the temple, buried it under terrain and transformed the former lush paradise planet Navede into a barren and hostile desert.

Only a handfull of templars survived and returned to Qitand-Tus, traumatized and deprived of most of their powers, but still passing on some of their abilities and all of their knowledge to their descendants.

These descendants are today's Knights of the Good Light, equipped with comprehensive ancient and mysterious powers and knowledge, securing and supporting fellow travelers all across the universe. Their uniforms and armour show the traditional Qitanian colors, and they can be seen at community events and elsewhere patrolling in their white and yellow "Aegis of the Eguro" needlenose fighters.

As the Qitanian spirit demands it, they will never attack, but always defend, and are ready to protect and secure with full force at any given time.

If you want to join the Qitanian Empire, please contact a Qitanian Advisor via NMS_QitanianEmpire and express your wish.

Although Qitanians are originally humanoid anomaly characters, it is not mandatory to be one yourself. All members of any race as well as all entities and beings that feel like they should be a Qitanian and are willing to follow and identify with the Qitanian directives of being friendly, peaceful, reasonable, and helpful people can join the Qitanian Empire and benefit from being part of it.

Once approved, you are free to officially call yourself a member of the Qitanian Empire and discover, colonize, name, document, speak, and act in its name. You will also be part of the Qitanian trade and exchange system and have advanced and unlimited access to the Qitanian supply farms.

If you wish to join the Empire, sign up on our Census page.

The following systems have been claimed for colonization: