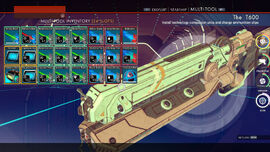 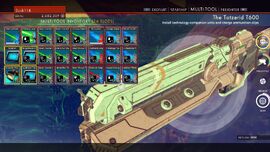 The Totzerid T600 is one of the Multi-Tools in No Man's Sky.

It is a pale two-tone coloring of lime green and tan, with orange and white stripes above the barrel and trigger grip.

The Pathfinder update caused this weapon to become a C-Class Rifle with no bonuses. It has a Damage Potential of 277.9, a Mining Yield of 184.5, and a Scanner Range of 420.6.

Prior to Update 1.11, there appeared to be a minor bug in the naming of this multi-tool. Where the word Totzerid is, there used to be simply an extra space, as if the name generator failed to provide a word, resulting in the multi-tool being named "The T600".

A similar error is noted on the Insight of (Nihonmatsuba) Vuettame HJ548 where only the "Insight of" appeared as the tool's name.

As of the Pathfinder Update, this multi-tool has been renamed to Magnus Americanus MT883. No other aspects of the weapon have changed since the Foundation Update.