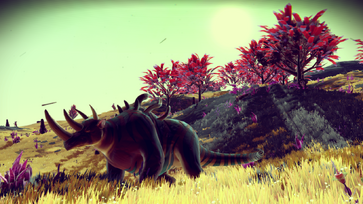 Theroma is a genus of fauna in No Man's Sky.

Commonly referred to as "triceratops" (the common name used by the game code), as well as "hippos" or "rhinos," depending on their appearance. Theroma species can be found on land, excluding caves.

If presented with a creature that one cannot tell if it is of the Theroma, Procavya, or Ungulatis genera, here are some tips to differentiate: