Top of the Galaxy Hub

Top of the Galaxy Hub is a Civilized space community.

Top of the Galaxy Hub is a Civilized space community in No Man's Sky. It is located in the Delta quadrant of the Euclid galaxy.

Our motivation is to free the interloper from hunting money. We want to build real player-made in-game content like hidden Secrets, treasure-hunts, and challenges.

We can also be reached on the aminoapps.com site: #TOG

At any time, exactly one [TOG]-coin is hidden in one of the 500 [TOG]-systems. If found by a TOG member, this coin will be credited to him and a new one will be hidden.

NOTE: only Level 4 Hub members can be credited with [TOG]coins by posting the code in the Community.

!!(visit tourist Information center to find the self explaining steps on how to become a level4 Member)!! 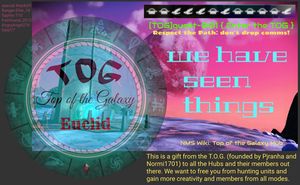 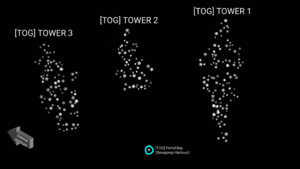 There are three Towers in Space. All Towers are named numeric upsidedown for easy navigation in-game.

The first number (1) shows which tower it is and the second one (-090) shows the system number Inside the Tower. Inside the {} normally shows the original name of the system, but there are also official TOG systems which are then also included in " ".

After arriving, it is recommended that you visit the [TOG(1)]-174 { "Tourist-Information-Center" } first.

find a Crashed Ship S-class Exotic in one of the TOG systems and get One [TOG]coin.

find a S-class Experimental or Alien multi-tool in one of the TOG systems and get one [TOG]coin.

A list of blueprints available in the TOG domain. all Blueprints of TOG

If you are a Level4 Hub member you have access to the PSNcommunity. At the community, you can send a request for a 1-on-1 copy of your Base in any mode.

There are official TOG architects who can do that. It is also allowed for Hub members to deal with coins for services and send requests for coin transfers.

This can be very useful if you want to build a true multidimensional base, or you want to leave your base and visit again later.